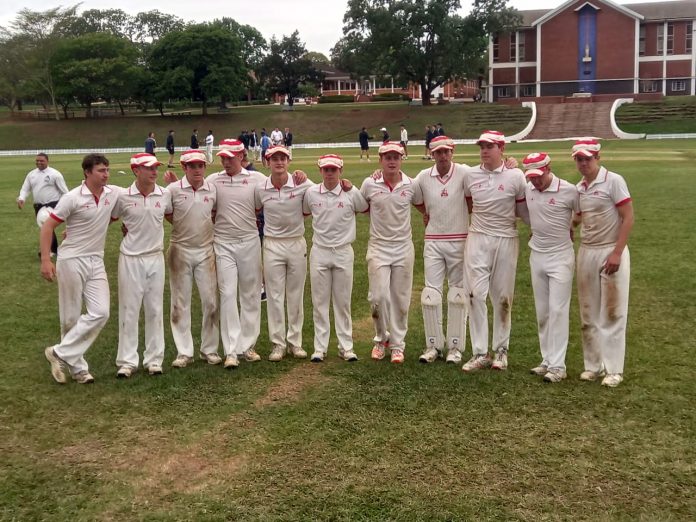 On the whole, results went the way of the Boys from Balgowan. While the hosts came away with four wins from seven open age group fixtures on the basketball court, their firsts despite being tipped for the win, were not able to reverse a run of three straight losses to House. Saints burst out of the blocks and cruised into a seven-point lead by the end of the first quarter. It wasn’t until well into the second quarter that Michaelhouse were able to make an impression on the scoreboard and establish a little order in their defensive game. Having cracked the code of the St Charles offensive patterns, the House lads began to turn the defensive tables allowing very little in. Grade 10 baller, Abongile Xulu discovered his rhythm and was instrumental in tightening the screws during the third and fourth stanzas, extending the visitor’s lead to nine points at one point. In a last-gasp bid Saints clawed their way into a two point advantage with 90 seconds on the clock. A match-winning three-pointer by Matthew de Villiers, followed by dogged defense guaranteed a 45-44 victory in a low scoring contest, defined by defense, for Michaelhouse. While House came home with a clean sweep of victories in the four U15 clashes, it was only the U14D loss to St Charles that marred a perfect record in the age-group results.

Out on the pitch, House were dominant coming away with wins in nine of the eleven fixtures, including a tight 24 run win for the first XI. House skipper, Adrien Fisher won the toss and asked his boys to pad up. Chase Michaux (54) and Alex Vermeulen (54*) were contributors in the main to their team’s 285/9 from their allotted 50 overs. Wins for the seconds (Joe Price 52), thirds, fourths (John Yeadon 118 off 66) and James Gilson (73 off 53), and fifths (Grant Leslie 50*) were characteristic of the buoyant cricket culture in Balgowan. The U15B side’s 5 wicket loss was the only X in that column on the day, although on 95/1 chasing down 127, House’s U15A boys almost followed suit. Few teams in such a commanding position would ever expect to call on their No11 batsman to steer the ship home to victory! Luke Fellner’s 62 off 33 balls, and Callum James’ 57 off 25 ensured a strong win for the House U15Cs. Daylight ran out on finely balanced U14A encounter with St Charles on 196/5 chasing down House’s 226/7. Strong fielding ensured wins for House’s U14B and C outfits.

It was one-way traffic in the waterpolo pool with Michaelhouse coming away with strong wins in the only two fixtures scheduled for the day. 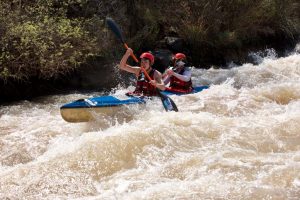 At the Fish River Canoe Marathon which doubled as the South African K2 River Championships, the Michaelhouse Canoe Club continued its tradition of dominance in the Eastern Cape. Nineteen Michaelhouse paddlers participated, but it was Matthew Millward and Jack Edmonds, fresh from an overall tenth place at the World Marathon Championships in Romania just a week previously, who claimed the limelight, finishing sixth overall; breaking the U18 K2 record set by Michaelhouse paddler Stephen Bird and his partner in 2006, in the process. Jack Shooter and Murray Behn raced in close behind in fifteenth place overall and second in the U18 category on Day One. Boat issues on Day Two cost them a podium place in the U18 category; but a 29th overall position in what is a premier event was a fair return for the young canoeists. Rob Butcher and Dom Furby took the gold laurels in the U16 category.