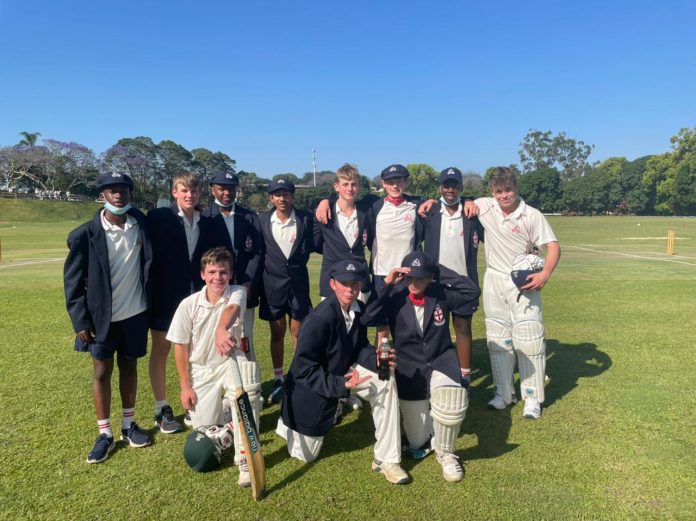 The weather played kind host over the weekend to the first full set of summer sport fixtures between Westville and Michaelhouse since January 2019; and while the spoils were reasonably evenly shared across codes, the Boys from Balgowan can be satisfied with positive results in most of the grandstand contests winning both the first team cricket and basketball clashes, and losing only the cricket and waterpolo games at A team level in the U15 age group.

Michaelhouse first XI skipper Adrien ‘Fish’ Fisher won the toss and sent Westville in to bat in greenhouse conditions on Bowden’s. House’s four-pronged seam attack was metronomic, bowling disciplined line and length and choking the run flow from the first ball. The host’s batsmen were dismissed before any could dig in, with spinner Oyama Ntshona capitalising on their frustration taking 3/29, skittling Westville with just 144 on the board. Mature strike rotation and a level-headed approach to chasing down the target with time on their hands ensured the five wicket win over a competent Westville outfit in the 35th over (Gus De Villiers 44, Jeremy Foss 41*).

Back in Balgowan, Tom Tom Walters belted his maiden hundred, guiding the Michaelhouse 2nd XI to their three wicket win, undefeated on Nelson. With the run chase very much in the balance, House’s James Asherson walked without being given out, on 36 (off 32), a happy reminder that honour is hale and hearty in schoolboy cricket! House’s thirds and fourths wrapped up the clean sweep in the open age group.

The U15s were not as fortunate, losing all three fixtures. Cival Rugbar’s stoical 67 was not enough to push the A side across the line, falling 88 runs short in their chase of Westville’s total. Two runouts by House’s Koketso Bopape were the building blocks of the U14A side’s confident 6 wicket win, their first at U14 level in over half a decade! A loss for House’s B team, and a win for the Cs wrapped up a full set of cricket fixtures.

While Michaelhouse’s basketball teams contented themselves with six wins from 13 starts, an emphatic 59-35 win for the firsts, a 28-17 victory for the U15As and a tight 26-25 win in the U14A clash ensured House’s ongoing pedigree in the game for the years ahead.

In Gauteng, House’s first waterpolo side were brought down to earth after a successful run just a week previously in a tight 7-8 loss to Grey High and a lacklustre 3-9 showing against St Andrew’s College. Back home, against Westville, House’s seconds and U15A boys recorded Ls in the results column while the thirds chalked up a win and the U14A boys claimed their sixth win in nine starts this season with a 9-3 victory.