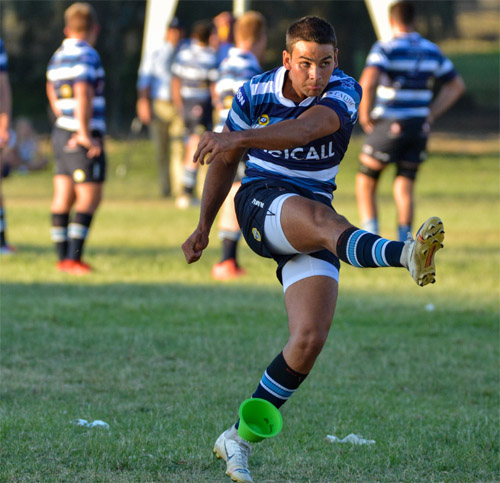 It didn’t take the Bulls long to earmark and contract two of the hottest school rugby players following the North-South Tournament at Affies.

Neil le Roux and Compion von Ludwig have both been contracted to further their rugby aspirations at the Bulls.

If we watched any of the matches that Neil le Roux played in at the North-South Tournament it would be difficult to forget the impact that he made as one of the most dynamic players on display.

The Oakdale scrumhalf exhibited great vision and wonderful handskills which made him an immediate favorite with the talent scouts. He is arguably the leading scrumhalf in school rugby at the moment, with his tactical and set-piece work right up there with some of the best.

Le Roux seems to have that rare gift of identify space on the park and it was his execution of tactical kicking that kept Oakdale on the front foot and made people stand up and watch over the past week.

Many are likening the Oakdale No.9 to Springbok Fourie du Preez and in his match against Garsfontein he certainly displayed some of the hallmark skills of the Springbok great.

Le Roux has been on the radar from sometime now and earlier this year, Le Roux and three of his Oakdale teammates, Phillip Kleynhans, Paul de Villiers and Dian Heunis, were invited to a virtual open camp as part of the SA Rugby Elite Player Development EPD under 18 training group.

During the virtual camp, particular emphasis was placed on players’ positional skills, conditioning, and rehabilitation techniques.

Boishaai flyhalf Von Ludwig is also highly regarded by several experts. He is not afraid to pick up the ball, defends deadly, has good vision, safe hands and has exceptional tactical kicking.

As a former Western Province wrestler not only is he a difficult player to stop but that background has also helped his defensive work and contact skills.

This Saturday, 8th May 2021 there will be a match within a match when Von Ludwig (Boishaai) takes on his opposite number Grey College’s Jean Smith, the son of Springbok Franco Smith. It will be interesting to see how the two pivots perform in this school rugby spectacular.

Rugby: Is the Cape the School Rugby Powerhouse?