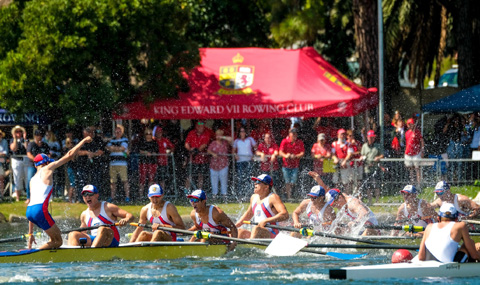 With the massive hyacinth infestation at Roodeplaat dam, the South African Rowing Championships were relocated to Victoria Lake Club in Germiston. This meant instead of racing over 2000m – the country’s top schools demonstrated their prowess over 1000m.

Other top contenders for the 2022 title included Jeppe Boys, St Alban’s College, St Stithians, St John’s College and St Andrew’s Grahamstown. There were plenty of gutsy performances and nail-biting finishes but in the end, St Benedict’s emerged as the best U14, U15, U16 & Open Boys Club; won gold in both the 1st and 2nd Eights and was recognised as South Africa’s best rowing school. St Alban’s College emerged as the best sculling school.

Although the number of entries was down in the wake of the Covid-19 pandemic which curtailed participation in the sport – 14 boys’ schools, seven girls and three co-ed schools participated from across the country. The event also drew entries from five of South Africa’s Junior Clubs who entered scullers from 15 different schools.

Sadly Covid-19 restrictions also meant that the South African Schools Rowing Union was unable to invite a number of Zimbabwean schools who traditionally participate in the regatta. But despite a decrease in numbers, there was no lack of talent with the art of rowing proudly on display. Oars danced through the water one powerful stroke at a time – mesmerising spectators who were caught up in the buzz of each heat. It was an exciting culmination to the 2021/2022 rowing season.

College Headmaster, Dave Jeffrey says, “We are the only South African school to hold onto 28 back to back titles in what is a truly demanding sport. This victory is a result of many hours of training and focus and we’re incredibly proud of our boys who gave it their all this weekend, demonstrating how dedication and hard work always pays off.”

Adding to this he says, “Of course without the commitment of coaches, and parents, as well as a continuous investment into our flagship sport, we would not have such a large percentage of our boys selecting rowing as their preferred summer sport. Success breeds success and everyone wants to be part of a winning team.”

All the competitors deserve to be praised for how they embraced and prevailed over the season’s challenges. The Covid-19 pandemic severely compromised school sport in the last two years and the opportunities to compete were limited. But rowing schools continued to train to ensure the future of SA Rowing remained bright. This commitment was rewarded when for the first time in two years parents, family and friends were able to gather for SA Champs and truly celebrate the boys’ successes.

It was encouraging to see top performances across both co-ed and monastic schools. The 2022 Champions across the categories are:

A proud and committed Bennies Old Boy, Darryn Roff runs and coaches the St Benedict’s Rowing Club, and adds, “The 2021/2022 Rowing season may have ended, but preparations for the next season are already underway. Over the years we have turned out some of the top South African rowers and many international university rowers were born and bred at St Benedict’s. The way we approach our training and mentoring in the sport has worked for 28 years and we are not stopping here!”

Speaking at the Championship prizegiving, President of South African Rowing, Sean Kerr, congratulated the athletes on their performances and reassured everyone present that RowSA is working closely with the government to ensure that Roodeplaat dam is restored and that rowing continues to be recognised for the incredible sport that it is.