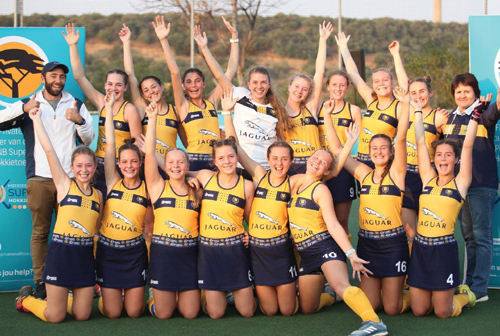 Tim Grover, recognised as the trainer to the most elite, iconic athletes in the world, including the late Kobe Bryant, Dwyane Wade and Michael Jordan once summed up in words how the best coaches succeed: “People who start at the top never understand what they missed at the bottom.”

It is an interesting quote, because in one sentence Grover explains that success does not happen by magic, but the result of starting at the bottom and working harder than anyone else to get to the top. From that journey a champion is born.

Morné Ordendaal, arguably the most successful Girls school hockey coach in South Africa points to that self-same quote as the one he uses to motivate himself and the Oranje Meisies First Team.

Morné started his journey with Oranje Meisies back in 2011 when he was coaching the U13 team. A couple of years later in 2013 he was coaching the First Team. Since then, he has coached the team in 354 matches, he has won a staggering 335 of them, drawing 11 and only losing 8. That is a staggering 95% win ratio against the best in the country! But let us dig a little deeper into the stats. During that time, his First Team has scored 1698 goals and only conceded a paltry 108 goals, with his longest winning streak being 127 matches!

It is a record that few great coaches can even come close to. Yet Morné would be the first to admit that his and Oranje’s success has not come about by accident.

“My values that I instil in the team is to firstly to fight, to have a willingness to go to a place our opponents are incapable of going to. Secondly, do your job, they must be a disciplined team that respects the detail of the process. And thirdly, the team comes before yourself, they need to be accountable for themselves and their teammates efforts and actions,” says Morné.

It is clear to see that the huge success that the Oranje first team have enjoyed in hockey has been thanks to a dedicated coach who has been able to cultivate an unparalleled work ethic with the players. Many of their finest players started right at the bottom of the hockey nursery but rose brilliantly through the ranks due to sheer dedication and work.

“Yes, there are 3 players that stand out as players who surprised me. Carienke Jacobs made the Southern Free State U18 B team in her Grade 11 years. In her matric year she decided to change positions from a back to a forward. She worked incredibly hard and this year she made the South Africa U18 team.

Then there was Matile Prinsloo who was dropped from the First Team at the start of her Grade 11 year. But she worked hard and got herself back into the 1st Team and later that year she made the SA U17 team.

Lizanne Jacobs was another one. She came to Oranje in Grade 8 from a small school. She was a real rough diamond in Grade 8 with plenty of potential, but she just could not put it into performances. Through extreme hard work she managed to get selected for the South Africa U21 squad when she was only in Grade 10,” says a proud Coach Morné when looking back on the effort that his players are willing to put in to be the best.

So those are the best players he has seen come through the ranks, but hockey is a team game so who was the best team?

“The most successful team I coached has to be the 2016 Oranje 1st Team! You know when I started coaching Oranje the goal was to change girl’s hockey for the better. To make the brand faster, fun to watch and to create a culture of belonging on and off the field. A place where you are happy for someone else’s success. That 2016 1st team achieved both those goals with merit under an exceptional captain in Jana Greeff. They played 47 matches, won 46 and drew 1,” reminisces Morné.

Immensely proud to see how they excel after school

To coach a school first team for close on a decade is no mean feat, but to consistently keep that team at the very top puts Morné in extremely limited company. It is also clear to see that he shows a keen interest in his players success from the moment they start their careers at OMS all the way through their careers.

The Best Players Morné has coached?

Morné has witnessed many of his players continue playing hockey at a high level once they have left the school. In fact, a total of 27 of his players have gone on to play in the SA 18a, SA U21 and South African Woman teams. Which players does he believe are the best he has ever coached?

“I have had some electric players over the years. Goal scoring machines like Antonet Louw and Minke van Heerden. Midfielders that broke the line with speed like Simone Gouws and Lizzane Jacobs. Defenders who were like brick walls and could also pass the ball over half the field like Jana Greef and Jacolene McLaren. There are many more names that I could mention, but perhaps the best 2 players ever are Mikkela le Roux and Ané Janse van Vuuren,” replies Morné.

Those who know Morné Ordendaal would describe him as a coach who is passionate about the sport, a good mentor with a great sense of humour. His 2020 captain Mikkela le Roux goes a little further in her assessment of him as a coach:

“Morné makes hockey a lifestyle by how professional and committed he is. He also always tries to make it fun and memorable. Morné is so much more than just a hockey coach sometimes he is also a life coach, he always helps you to become your best self and motivate you to achieve your goals. Everything considered he is highly successful in what he does, and everyone loves playing for him,” mentions Mikkela who recently was selected to play in the SA U21 team.

Morné points to his team’s success at the St Mary’s Festival between 2014-17 as the most memorable sporting moments of his career. Winning that tournament for 4 successive years is a great achievement. They missed out in 2018 but bounced back in 2019 to win it again!

Uniquely placed at the ‘factory’ for South African woman hockey players, Morné believes that hockey is in a strong position now.

“I think the standard of school hockey is at a great place. If I could pick a team that I have coached and coached against during the past 10 years and we train together on a High-performance level, I can’t see how we would not get a medal at the Olympics. If the sport could be become a professional sport like rugby, cricket and soccer, more players will continue playing after school,” he believes.

You will go a long way to find a more successful school sport coach in any code. A coach who has taken Oranje Meisies to the top and kept them there for close on a decade. A coach who epitomises the age-old maxim: