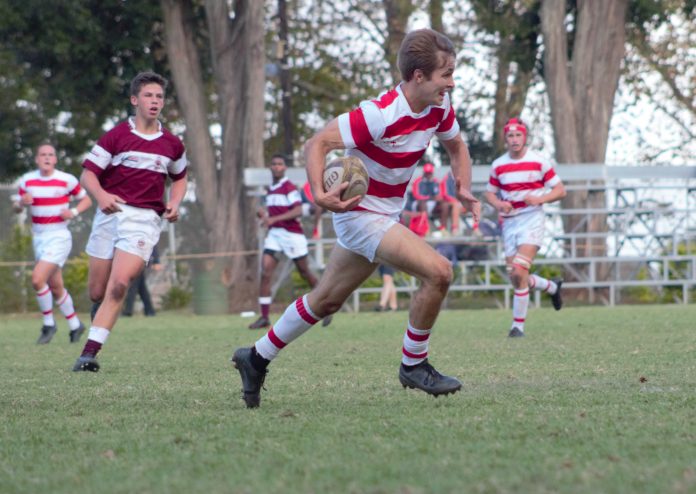 The boys from Balgowan disembarked at Botha’s Hill chomping at the bit after more than 23 months without a full set of winter sports fixtures! And while Covid’s presence didn’t go unfelt in the absence of stands full of partisan support and the last minute cancellation of the first XI hockey fixture between Michaelhouse and Kearsney College, both schools relished the opportunity to contest ten hockey and 17 rugby fixtures.

Where House can confidently lay claim to having enjoyed the ascendency in the open age group hockey games, winning the second and drawing the third and fourth XI clashes, the hosts held the upper hand in the U16 category, winning three form four including a dominant 5-0 win in the U16A game. The spoils were shared in the U14s, with a win, a draw and a loss apiece, but with Kearsney earning a solid 6-1 victory in the A side encounter.

Things were not as equitable on the rugby park. While Kearsney ground out a tight 12-7 win in the U14A match, House’s U14B and C team lads cruised to easy wins, with similar outcomes in the U15 class except that the tight win went the way of Michaelhouse, 8-5 in the A side clash.

Michaelhouse’s U16 age group was dominant, chalking up confident victories across the board. Coach Ryan Strudwick’s U16A boys put in their bid for the result of the day, turning their heavy 7-42 loss to Kearsney in U14 into a hard won 26-13 win on Saturday.

It was one-way traffic in the opens, with the seventh, sixth, and fifth XVs all notching up big wins for Michaelhouse. Kearsney’s fourth XV looked to stem the tide on Stotts, quickly drawing ahead and requiring House to score three times to stay in the game. House fullback Kevin Smith sparked the comeback with two explosions of individual flair from within his own half to get his team back in the game and eventually grind out a 36-24 win. While Michaelhouse’s thirds had it all their own way, the seconds were also forced to dig deep and claw their way back from a deficit for their 55-24 win.

Coming off back to back wins in 2018 and 2019 and with plenty to prove in the context of the day, Kearsney’s firsts charged onto the pitch for the seventy-sixth clash between the two schools. From the kick-off Kearsney looked as though they might counter the day’s formbook, keeping the visitors guessing through enterprising interplay between backs and forwards and playing from depth, thwarting House’s line speed and quickly tearing into a domineering 17-0 lead.

Taking a leaf from the All Blacks Textbook, Michaelhouse then scored out wide on the stroke of the interval through winger Ayabonga Zakwe and immediately after the break through fullback and captain, Alexander Vermeulen, to bring themselves back with range on 12-17.

An intensive two year plan of athlete conditioning in Balgowan, which had reaped a rich harvest in all of the previous games, then began to take its toll on the home side as Michaelhouse put the boot firmly on the other foot in the second half: running into space, kicking with pinpoint accuracy, turning the defence, disrupting set pieces and upping the tempo of every aspect of the encounter.

Loose forward and vice-captain Jaden van der Merwe was a major factor in the set pieces and stamped his mark on the collective second half offensive effort. Recently repurposed scrumhalf, Joe Price capped off an influential performance with a brace of tries, both converted by Vermeulen to wrap up the comeback. Kearsney’s consolation try late in the day allowed an honest reflection of the encounter in the record books, a 26-24 win to Michaelhouse.

By Head of Marketing – Michaelhouse.