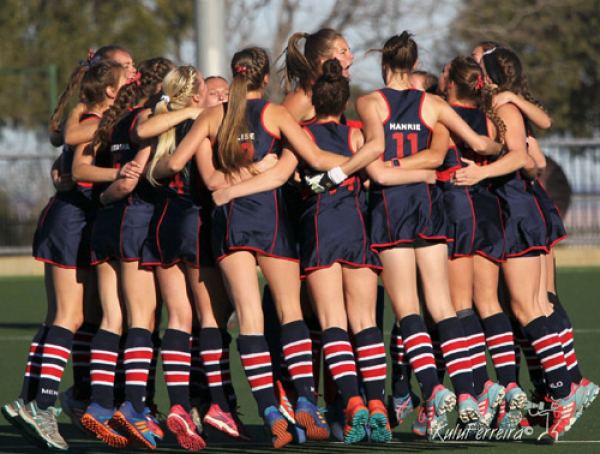 It was a motivated Menlo Park who took on the best in South Africa at the FNB Top 12 Schools Tournament hosted by Oranje Meisies and ended up champions when the dust had settled.

There were several teams who would have entertained a realistic chance of winning the tournament which boasted some of the big names in school hockey. Hosts Oranje Meisies the only previous winners, where the favourites and had been in terrific form this season. However St. Mary’s Kloof are proven conquerors and would have fancied their chances alongside Herschel.

However it wasn’t to be for Oranje this time around as they got beaten by St. Mary’s Kloof right on full time in a fiercely contested semi-final. Herschel, who had played some terrific hockey right through the tournament not losing any of their pool matches where finally outgunned by Menlo in their semi-final to set up an appetizing showdown between Menlo and St Mary’s Kloof.

With neither side in a charitable mood the final had to be settled with penalties with Menlo emerging as the winners of yet another fantastic tournament.

St. Mary’s Kloof climbs into second position on the Belgotex Sports Top 70 Rankings, narrowing the gap significantly on Oranje who grimly hold on to the top spot, just.

Menlopark and Herschel share third spot with Collegiate making up the top five. Interestingly the teams finishing in the top 7 at the Top 12 Schools Tournament all feature in positions 1-7 on the rankings.

Please send through all your results to [email protected]