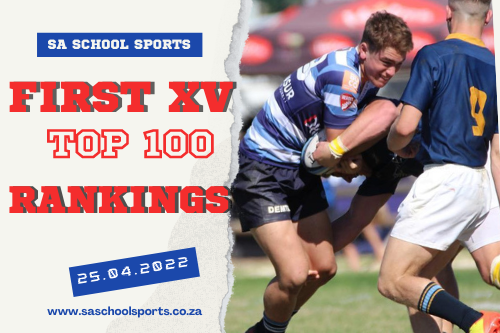 Oakdale dug deep to come within seconds of claiming the rarest of wins against Grey College but at the end had to share the spoils 17-17. A much-needed boost to an Oakdale side that has fired hot and cold so far this season.

There were several other interesting results, with Rondebosch getting over the line 22-19 against Paarl Boys High, Durban High School recording their biggest win over Maritzburg College at Goldstones 38-14 and Affies doing enough to hand Paarl Gim their first defeat of 2022, 29-26.

The somewhat unexpected results by the leading teams have had some effect on this Week’s First XV Top 130 Rankings. Grey College remain at the top with Bishops, who were locked in a 38-38 draw with Paul Roos Gym, following closely in the second position.

Rondebosch climb closer to a Top 5 finish with DHS now with a realistic opportunity to move into the leading 20 after their successful run at the Kearsney Easter Festival and the recent win of Maritzburg College.

With still plenty of matches to be played there will still be some movement on the First XV Rankings in the weeks to come.

Please send through your First XV results to [email protected]