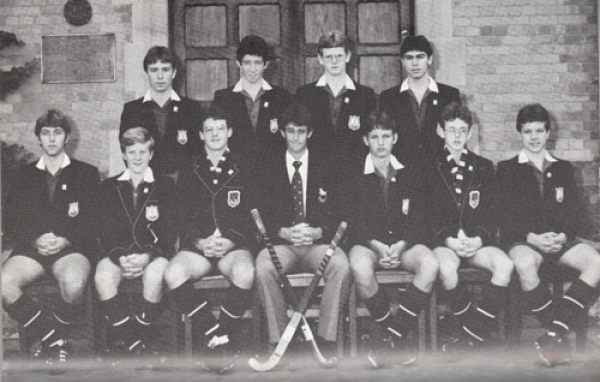 With 10 minutes to go before the umps blew the first whistle, I was trying to inject some gees into the Maritzburg College guys. However, unlike our customary fiery build-up to a big game, this time round our first team warm-up was eerily subdued, akin to a dead man walking as he makes those fateful final steps up to the hangman’s noose.

“Come on boys, Giles Bonnet’s only human [and the 1983 SA Schools’ captain]. Don’t worry about him, we’ll snuff him out when he tries his fancy-Dan stuff in central midfield.”

No reaction; the feared Red, Black and White of Maritzburg College was already in deep trouble, I feared, and the first whistle was hardly 10 minutes away!

“Andrew [Tiny] Townsend and Gavin Mitton might have made Natal Schools’ but, hey, they’re dodgy outside halves.” (Well, Gav and Andy hardly let an outside striker past them at Dick Stead Week [now Boys’ U18 IPT] as the then combined KZN Inland and KZN Coastal team went unbeaten to win IPT at a canter).

Later that year at Nuffield (now Coke) Week, the fearsome, big-boned Hurlbatt (he was like that wild leather-flinger Charlie “Mad Dog” Hooper in Spud) went on to hurl ball at bat with such malicious intent that he waltzed into the SA Schools’ cricket side.

“C’mon boys, we’re the Red Army, we can beat these Balgowan Tech boytjies any day of the week!”

No one even looked at me. Other than the odd thousand-yard stare (subsequently made famous by the legendary former Sharks and Springbok rugby coach Ian McIntosh) into the misty Balgowan distance, no one was at home amongst our bunch of no-hopers. The guys were nowhere – meekly accepting their fate.

My players looked anywhere but at me. As the 1982 Maritzburg College first team hockey captain, I realised with a growing panic that my pep talk wasn’t having any effect, nothing, nada, zilch …

“…our half-line crumbled, crumbled in the face of wave after wave of attack from the merciless red-and-whites of Michaelhouse…”

Ah well, I conned myself, the guys are completely in the zone, so focused that they are oblivious to words from the outside world. Ah yes, I thought, the manne would settle down and be sharp as razor blades once the first whistle blew.

Yeah, right! What followed in the first 15 minutes was undiluted, unadulterated mayhem (if you were a Maritzburg College supporter, that is). It was Vietnam, the Holocaust, the bombing of Dresden, nuking of Hiroshima and Nagasaki (Google it, Generation Y) all rolled into one despicable, horrific full-colour illustration of cold-blooded carnage at its very, very worst.

Hurricane Hurlbatt blew us away (including bewildered sweeper Luc Princen and bemused goalkeeper Clive Mingay, whose spinal nerve roots must have been irritated beyond breaking point such were the number of times he had to pick the ball out of the back of our net in the first 15 minutes).

What must Mr Bechet think, I worried, as I took a furtive squiz at him watching stone-faced from the sidelines. (Mike Bechet, the legendary College first team coach, who was in charge of the side for 30 years, must have been wondering what he had let himself in for, as he had just arrived at the school to take over the first team from our dearly beloved, departing, coach, Merino Sheep).

With me at the centre of it, our half-line crumbled, crumbled in the face of wave after wave of attack from the merciless red-and-whites of Michaelhouse.

SA Schools’ captain Giles Bonnet (later to become the SA men’s captain, then coach, and currently the Investec SA women’s head coach) was his silky, sublime self, twinkling past defenders in a manner that belied his backline rugby player build before laying off inch-perfect passes to striker Hurlbatt, who obliged with polo-like whirls of his hockey stick that sent the white nut fizzing into our net just a few inches off the turf on that billiard table Michaelhouse grass.

Mitton and Townsend were calmness personified in the Michaelhouse first team half-line, skilfully mopping up the rare College sorties upfield before setting up Bonnet and Hurlbatt for the kill.

As if sensing that we were easy meat, the Red Army closed their quarry down like a pack of hyenas

We eventually lost, big; the biggest College defeat against Michaelhouse to this day.

On the bus back to the hallowed turf of Goldstones at Maritzburg College for the first XV rugby match, the guys were thinking of any excuse not to pitch for the game, knowing the scorn we would receive at the hands of the rugger buggers.

Then one small voice piped up from the front. “Please Cook, there’s still the return game! I know you can win it!”

Yeah, right, I thought, “A second former (grade eight) with an undying belief in the College cause; that’s all I need right now.”

“Listen lightie,” I felt like telling him, “if we’re lucky, those okes will drill us 10-0 when they come to Maritzburg for the return match.” But I just nodded ruefully, not wanting to burst this naïve second former’s idealistic pipedream – I had more chance of kissing Olivia Neutron-Bomb (think wholesome version of Lady Gaga, oh ye spawn of the Baby Boomer Generation) than us beating the Meanest Machine in KZN schoolboy hockey.

Still, the return game came around and we all decided to just relax and play our hearts out. After all, we already knew what utter humiliation felt like. What would be would be.

It was a midweek fixture on the dubious A.B. Jackson grass field adjacent to our school (Maritzburg College’s pristine Pape’s Astro was more than a decade away, still just a twinkling in Mr Bechet’s eye) and after we had swatted the myriad earthworm clods off the field, it was clear from the first whistle that somehow, incredibly, the starstudded Michaelhouse Mean Machine weren’t on song.

We all sensed that the fickle gods of hockey were smiling down on us … maybe, just maybe, here was a miraculous opportunity to atone for our shameful sin of a few months ago.

The Red Army of Maritzburg College played with the intensity and focus of a sports-mad little boy hunting down a prized signature. Our left centreback Andrew Brown, now a Michaelhouse teacher, had an absolute blinder, robbing his future employers of the ball on countless occasions.

Last lines of defence Princen and Mingay were like the Rock of Gibraltar (“They Shall not Pass” could have been their battle cry), strengthened by a College half-line that was doing its job for a change. And before long, Michael “Specks” Cook (my spindly brother was to all intents and purposes blind without his thick glasses) weaved his way like a weasel through half the Michaelhouse team to score our second!

Wow! At 2-1 up, could we somehow hold on? As if awoken from their slumber, Bonnet and company stepped up a gear or three and suddenly we were under a siege gun attack from all sides as “House” pushed for the equaliser, spurred on by their younger schoolmates who had played earlier.

Not to worry. My abiding memory – as clear as daylight – is watching in awe as the indefatigable fighter that is Andrew Brown miraculously emerged from a crush of Michaelhouse bodies in our goalmouth and cleared the ball into touch. Merino Sheep, alias J. Kedian, our Afrikaans teacher and coach, blew the final whistle as only he could – an eardrum-bursting shriek that must have created havoc in the nearby old age home.

We had, quite unbelievably, incredibly and absolutely magically, WON!

As we trooped wearily off, yet at the same time feeling like we were walking on air, a tiny second former with basher aloft rushed on.

“I told you, please Cook! I told you on the bus! I just knew we could beat them!”

All those years ago … It’s something I will never – ever – forget.