Home Sports Other Parents: The Subliminal Power Of Positive Cheering 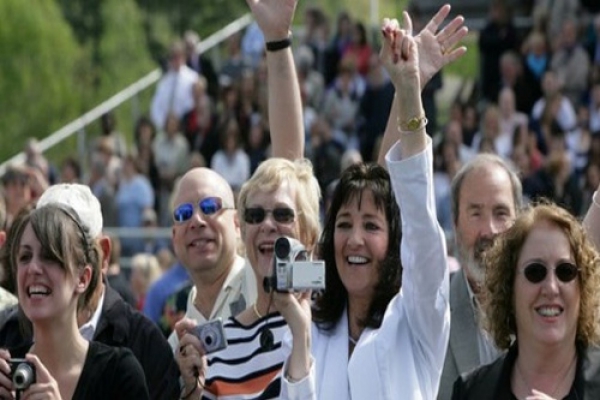 We have all heard it and even said it before, phrases of encouragement directed towards young athletes with phrases like, “dig a little deeper” or “you have to want it more than they do” or, ideally, “be mentally tough.”

For most kids, these words from a coach, a parent or a teammate go in one ear and out the other.  But, what if there was actually some scientific substance to the words?  Could the smiling, confident face of a coach delivering a pep talk actually have a subliminal effect on performance?  While the conscious brain may dismiss this positive talk, the subconscious mind may actually be putting it to work, according to new research from sports scientists at the University of Kent in England.

Besides skill level, one of the most limiting factors of top sporting performance is fatigue. Pushing through the last lap or the final 15 minutes without total exhaustion will often determine a winner.

Fatigue has long been tied to purely physiological causes like lactic acid build-up or lack of glycogen energy. Then, researchers pointed to a “central governor” theory that claimed that our brains protect us from complete physical collapse by hiding a secret small reserve of energy while signalling to our muscles to quit before the reserve is needed. Imagine a car’s “low fuel” warning indicator but with no gauge with a needle showing how much is left in the tank.  As athletes, we trust that when the warning light of fatigue comes on, we need to stop even though a few more litres of energy may be left in the tank.

However, Professor Samuele Marcora, Director of Research at the School of Sport and Exercise Sciences at the University of Kent, has a different theory, which he calls the psychobiological model. “According to this effort-based decision-making model, any factor that influences perception of effort and/or potential motivation influences endurance performance, even when the physiological capacity to perform endurance exercise is unchanged,” writes Marcora.

He proposes that, “the point at which people stop endurance exercise (i.e., exhaustion) is determined by perception of effort and potential motivation.”

In his latest study, Marcora wondered if subliminal messages shown to athletes could help block some of the fatigue signaling by communicating with the brain at a subconscious level.

He and his team gathered 13 healthy adults to undergo a wonderful sounding athletic test, the “time to exhaustion trials.” Just as it sounds, the volunteers first set a baseline of their fitness by pedaling a stationary bike at an ever increasing difficulty level until they simply could not go any further, either quitting or pedalling slower than 60 RPM.  There were asked for their Rating of Perceived Exertion (RPE) on a scale of 1-10 of their perception of the activity’s difficulty. On their second visit to the lab, they watched a video screen in front of them as they cycled.  For a slight 16 milliseconds (0.02 seconds), either a series of happy faces or a sad faces was flashed on the screen.  At this speed, the human eye is not able to consciously recognize an image, even though it does register with the subconscious brain.  For the group that saw the happy faces, they were able to pedal three minutes longer than the group that saw sad faces.  RPEs were also lower for the “happy” group.

Marcora sees possibilities to help endurance athletes before and during races with positive subliminal messaging delivered by intelligent eyewear. Imagine a cross-country runner or a triathlete receiving ongoing positive reinforcement directly to his or her subconscious mind.

For parents, we could send all of those well-intentioned, motivational phrases to our young athletes with a lot less yelling. With the same set-up at a third visit, the test subjects “saw” either positive words (Go, Energy, Lively) or negative words (Stop, Toil, Sleep) flash in front of them.  Again, the positively motivated group outperformed the negative group, this time by 17%.  Simply being exposed to motivating faces or words increased their effort and performance.

Like all of those positive homemade signs along the course of a marathon, these results show that this reinforcement does indeed help change our attitude at a level that we don’t even recognize.