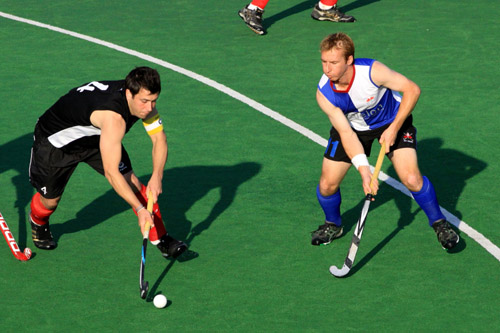 And he should know more about the subject and be more knowledgeable about it than anyone else I know, plus be more qualified to give me the quality of answers those probing questions deserve.

“Bech”, as the Durban High School (DHS) Old Boy is widely known, is the former long-time Maritzburg College director of sport who has coached the Maritzburg College first team for 30 consecutive years and 640-odd matches, surely a record that will never be surpassed at any school. Six of his teams have been unbeaten and in this time he has produced 13 players who have played for South Africa at Olympic Games, Hockey World Cups, Commonwealth Games, Champions Challenges, Africa Cup of Nations and more.

I would be interested to know if any other school first team coach has produced more than 13 SA men’s players in the last 30 years.

His playing and coaching pedigree is not matched by many. Bech played for SA U21, Eastern Province and Natal (in the days before KZN divided into the Inland and Coastal hockey provinces) and legendary former Springbok men’s captain and coach Brian Edwards once told me that the left-side forward had come very close to making the senior national side during his heyday.

As the coach of the Natal men’s side, Bech won IPT and Allied Cup doubles in the days when there were two tournaments available for South Africa’s top men’s provincial players.

In recent times, Bech has doubled as the SA men’s team convenor of selectors and does the same job for the SA U18 side. His passion for the game is found among a precious few in our country and therefore who better to ask for an assessment of where SA schoolboy hockey is now, where is it going and what does the future hold for those who play schoolboy hockey and those coming through from primary school level.

There is also sage advice for parents whose children are interested in pursuing the sport seriously, be they boys or girls, and the kids themselves can take on board the valuable advice that Bech imparts.

Those who know him will confirm that Bech is not the kind of guy to pull his punches; he says what he says from the heart; without fear or favour – a trait that always brings its fair share of enemies but also brings an even healthier number of friends who understand that his heart, always out there in the open for all to see (there is little doubt that you won’t get what he’s feeling), is in the right place. The good of the game comes before anything else and there are few things he is more passionate about than SA schoolboy hockey.

“I don’t’ coach schoolboy hockey teams for unbeaten records, that’s not why I am coaching,” Bech says. “I want my teams to be measured by the brand of hockey they play, is it a pleasure to watch? It’s mainly about grooming talented schoolboys towards representing their country at top international events like the World Cup and Olympic Games.”

What takes a promising schoolboy into the SA men’s side? “Discipline, discipline and more discipline,” says the Maritzburg College mentor. “A willingness to sacrifice, a willingness to train, especially when no one is watching.”

I recall a discussion I had with Dutch legend Taco van den Honert, who came out to help the SA men’s side a few years ago. “Stick and ball; so few players who aspire to playing at top level appreciate how much time they must spend training on their own until their stick and the ball are like one in matches,” was the simple gem of knowledge that Honert imparted.

The supremely skilled striker represented Holland in the 1988, 1992 and 1996 Olympics, winning gold in his last appearance, so one can surmise that he knows what he is talking about.

Bechet says you have got to have natural talent but that’s only the beginning. “There are millions of people all over the world with talent in a whole lot of things but only those with the self-discipl

ine to utilise that talent are going to come through in the end.

“You can’t coach the world to want to succeed; it has got to come from within. As teachers and coaches we can point boys in the right direction but having said that, they have got to have the will to get out there and do it for themselves.”

Some of the payers in the current national men’s team who have made the transition from very promising schoolboy into national player are Lloyd Madsen (ex-Kearsney), SA captain Austin Smith (ex-Pinelands), Marvin Harper, Gareth Carr and Taine Paton (ex-Maritzburg College), Tim Drummond (ex-Hilton), Clinton Panther (Michaelhouse) and so the list goes on.

And what about the boys who develop more slowly than others, both physically and emotionally, and miss out on national age-group selection, do they still have a chance of making the senior SA team?

“There are examples of players who didn’t make national age-group teams who have gone on to play for South Africa, so I would say very much so. A lot of boys don’t develop as quickly as their peers during the adolescent years and again it comes down to the will and hunger to succeed, how much do you want it? And leave no stone unturned in trying to achieve that.”

And to make it, must you go to a hockey school? “Over the years there are obviously a couple who make it from outside that environment but most come from traditional hockey schools, so I would say that is definitely the way to go.”

The Rhodes University honours graduate said that unlike the past, every child has the opportunity to succeed, but there is one proviso. “The past is over, the best state education is accessible; the downside is that with little outside funding hockey is very expensive, parents have got to have the money.

“Hockey bursaries are key for economically disadvantaged boys but hockey is seriously underfunded in this area because schools focus on rugby, most schools are measured by how good their first XV is, but if you develop a good hockey culture, where your players are not second-class citizens, then you are going to attract good players through natural means.”

“The boy’s parents will have to make the effort, even if he comes from a long way away, place him in the boarding house of a school with a hockey culture, a school that is passionate about developing hockey, provides for hockey and where hockey players are not second-class citizens.”

Are synthetic turf pitches essential for developing a hockey culture? “They are a huge advantage, which is why Wynberg and Maritzburg College, the first schools in Africa to get turfs, gained an advantage, though many schools have the same now.”

Bechet says hockey premises on the school grounds where non-hockey players walk past and see what’s going on, and see those players earning national colours, is what gives hockey respect in schools that place a great emphasis on rugby.

And is the choice of the correct tertiary institution all that important? “It is critical that you get into an institution that has a good hockey culture, has stability, if you want to make it to the top. Good coaching, good structures; if it doesn’t have that you are going to go nowhere, and we see it in certain areas of South Africa as we speak.”

Bechet has seen an improvement at all levels in SA schoolboy hockey but thinks that a plateau has been reached. “I am not sure that we have got the strength and depth in coaching across the board at domestic level, in all parts of the country and age groups, and by ‘domestic’ I mean at actual schools as opposed to at U18 provincial and SA level.”

Will boys’ schools have to employ coaches, not necessarily full-time but at least part-time, as they don’t have sufficiently qualified teaching personnel to coach hockey? “Definitely; less and less males are going into teaching – your new generation wants quick money, quick success, and that doesn’t happen in the education game.”

Primary schools, are they adequately preparing youngsters inthe basics of the game to make a successful transition into high school hockey? “The boys are not getting prepared, simply because the majority of primary schools don’t have access to astroturf. Hockey at primary schools is very much a sport that is squeezed into a corner of the sporting year and to be honest I don’t think enough primary school headmasters see it as an important part of the sporting calendar.”

Is the successful introduction of soccer into hockey-playing high schools going to lure boys away from hockey? ”It won’t affect hockey at schoolboy level just yet because soccer has been squeezed into the third term. Soccer has affected athletics as opposed to hockey but what I can’t guarantee is hockey players not choosing to play soccer after school, just from a financial point of view and because there may be more opportunities.”

“We have got to move on if we want to succeed as a hockey nation; we have got to choose players on merit alone all the way through the system. We are 16-odd years down the track now and have got to start moving away from that or our hockey is just going to plod along.

“At Maritzburg College, which is a state school accessible to all, we have different phases where in any one year we may have four or more [non-white] players in a team and the next year maybe two, and so be it. We can’t be picking guys who are not there in terms of skill as against that of their peers.

“It is important to note that in a state school, the school environment where I would term it there is ‘naturalisation’ in terms of the colour issue, all kids want to be measured equally – and I am talking about the kids I work with every day – white, black, Indian and coloured South African boys. They are not interested in being measured in anything else other than how good they are in a specific activity.

“They don’t want to be measured by quotas because they are living in a natural environment inside the school, in which there are equal opportunities for all.

“There are examples of boys at Maritzburg College, and other schools, no doubt, being asked to go to provincial trials and they say straight out, ‘I am not good enough, I know why you want me there’.”

Bechet believes SA has got as much if not more young talent than anywhere else in the world. “The climate is fantastic; there is no reason why we can’t produce the quality of player to excel at international level.

“We underperform at international level, through age-group to senior, because we don’t have the budget for enough international competition. In Europe and elsewhere, from U16 upwards they play so many Test matches that by the time a Junior [U21] World Cup comes along they are seasoned internationals at that level.”

Funding, funding and more funding is required to take the talent and discipline inherent in South Africa’s best men’s players to the next step, the gold medal stakes at the world’s premier events.