Home Rankings Rugby The Difference Between Losing and Being Beaten 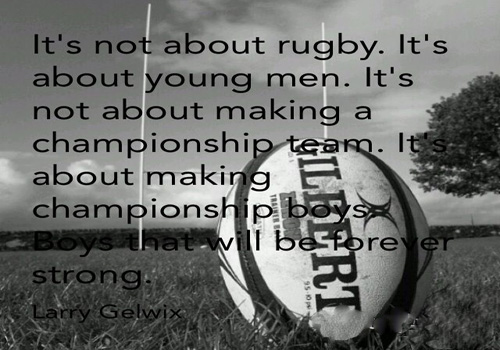 The Difference between losing and being beaten.

His name is Larry Gelwix and why most have not heard about him is that he coaches in the USA, not exactly the powerhouse of world rugby, at the Highland High School. Still he possesses a record few can match and many would be envious of. In 1998 Highland HS represented the USA at the World School Rugby Championships which brought together the top teams from around the world. Few gave the USA high school much of a chance but when the dust had settled they walked away with a brilliant third place finish, beating many traditional rugby playing countries along the way.

So notable is Gelwix’s coaching ethic that the movie “Forever Strong” was based on Coach Gelwix and the Highland Rugby Team. So what makes him so great and how can coaches learn from him?

Larry Gelwix coached the Highland High School rugby team to 418 wins with only 10 losses and 20 national championships over 36 years. He describes his success this way: “We always win.” With a record like Highland’s he has the right to make the statement. But he is actually referring to something more than his winning record. When he says, “win,” he’s also referring to a single question, with its apt acronym, that guides what he expects from his players: “What’s important now?”

By keeping his players fully present in the moment and fully focused on what is most important— not on next week’s match, or tomorrow’s practice, or the next play, but now— Gelwix helps make winning almost effortless. But how?

First, the players apply the question constantly throughout the game. Instead of getting caught up rehashing the last play that went wrong, or spending their mental energy worrying about whether they are going to lose the game, neither of which is helpful or constructive, Larry encourages them to focus only on the play they are in right now.

Second, the question “What’s important now?” helps them stay focused on how they are playing. Larry believes a huge part of winning is determined by whether the players are focused on their own game or on their opponent’s game. If the players start thinking about the other team they lose focus. Consciously or not, they start wanting to play the way the other team is playing. They get distracted and divided. By focusing on their game in the here and now, they can all unite around a single strategy. This level of unity makes execution of their game plan relatively friction-less.

What really struck me about Larry was his approach to winning and losing. As he tells his players: “There is a difference between losing and being beaten. Being beaten means they are better than you. They are faster, stronger, and more talented.”

To Larry, losing means something else. It means you lost focus. It means you didn’t concentrate on what was essential. It is all based on a simple but powerful idea: to operate at your highest level of contribution requires that you deliberately tune in to what is important in the here and now.