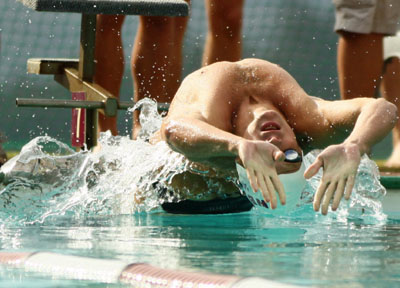 In January the school defended its champion status at the ALAN BURT INTERPROVINCIAL TOP 10 GALA at Ellis Park by winning an incredible 26 of the 30 races. This was despite the team missing several National swimmers who were involved in an International Meeting at King’s Park in KZN on the same day. This was the 5th successive time that Westville have won this prestigious gala.

Two weeks later Westville defended its Interprovincial Short Course title at the WESTVILLE INTERPROVINCIAL INVITATIONAL GALA. Their strongest opposition came from  Grey College (Bloemfontein) who are undoubtedly the second strongest team in the country.
On the evening the Highways giants again dominated proceedings winning 22 of the 26 events with Grey College winning 3 and Hilton College one.Wednesday 22 February saw Westville do battle against its local rivals at the DURBAN AND DISTRICTS GALA at King’s Park.  The packed stadium was treated to an awesome display of swimming by the champions who won all 26 events .This was something that had never been achieved in the 42 year history of the gala !

The following week so Westville defend its KZN TOP 8  title at King’s Park . They again rewrote history by beating the best in the province in every race to win all 26 events !
The team of 2012 is arguably the best boys high schools swimming team ever assembled in South Africa and their achievements will be hard to beat by any school’s team in the future

WBHS WIN THE MIDMAR MILE FOR 17th CONSECUTIVE YEAR
IT is not only in the pool the highways giants have acquired a national profile .They also boast a host of swimmers who have achieved national and international recognition in long distance open water swimming. The winner of the men’s race for the last 3 years is Chad Ho who was also the 2011 World Open Water Champion . Chad is  a recent member of the WBHS swimming team.

Following closely behind Chad in this year’s race were 6 boys from WBHS who finished in the top 30 men —an incredible achievement. They were :  Juandre Wiggill , Paul Van Achterbergh,Calvyn Justus, Brendan Levy, Delphin Jamme and gwcr1hua Danhauser.Brendan Levy’s and gwcr1hua Danhauser ‘s achievements are all the more remarkable because they are 15 and 14 years old respectively.