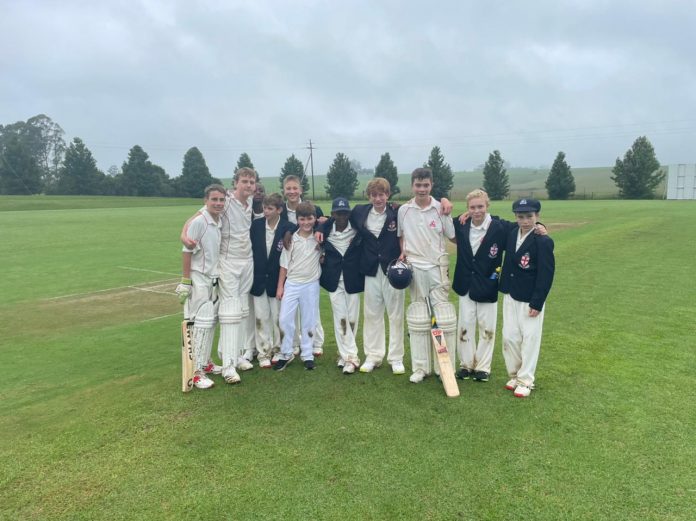 The return of the traditional rivalry between Michaelhouse and Hilton College, wrapping up the summer sport season, was marked by a week of ding-dong tussles with neither of the old adversaries emerging with the upper hand.

The boys from the Hilton mist belt claimed a 5.5 to 2.5 game victory in the first team golf clash, while House’s seconds chipped in with a 3.5 to 2.5 win. The firsts bounced back later in the week for a good 5-3 win over Maritzburg College, while the seconds went down 2-4.

House’s squash players were in an uncompromising mood winning 18-0 and 5-0 in the first and second team matches. Still with racquet sports, Hilton’s third tennis outfit went home 9-3 victors with the two second teams having to content themselves with a 6-6 stalemate. The first teams will clash later in the year when they compete for the annual de Wet Cup.

With a festival programme lined up for the weekend, the grandstand water polo fixtures were contested on Wednesday. House’s U14A lads, who have enjoyed a buoyant year, chalked up a 7-4 win over Hilton before going on to win four from five on tour, going down for the first time this season, 4-5 to Bishops. The U15A result followed their form book, with Hilton College emerging 8-5 winners. On the road, Michaelhouse returned a perfectly balanced set of results, with two ticks each in the won, drawn, and lost columns. The Michaelhouse first team cashed in early with home pool advantage and the confidence of having won their last two encounters with Hilton College. Between Campbell Ridl’s water tight defense and the cross bar, Hilton battled to find the back of the net for much of the game, and the hosts were able to grind out a two goal advantage going into the third chukka. Four unanswered goals from the visitors late in the contest were enough to turn the tide though, and a consolation goal at the death for Michaelhouse was only enough to narrow the deficit to 6-9 at the hooter.

On the weekend, Hilton’s waterpolo boys were rampant, winning all four of the remaining open games. Hilton’s U14B boys were able to balance the tables in the age group with a 9-6 win; and House’s U15B did the same romping home 8-3 winners.

In the Indoor Centre, Michaelhouse’s open age group basketballers turned the tables winning all six fixtures. In the first team clash, played out in front of a packed and decidedly vocal grandstand, neither side was able to hit overdrive in a low scoring event. House enjoyed the upper hand from the get-go but were never able to capitalize on the lion’s share of possession. On the other hand, Hilton didn’t cash in on the raft of penalty shots coming their way. Had they been able to land just half of them, the result may have been a different basket of goods altogether. At full time, Michaelhouse came away with a stop-start 41-30 win, their eighth on the trot over their old rivals.

Michaelhouse were equally assertive in the age groups winning four of the five slated fixtures in the U16s, including another low scoring win (19-7) for the A team. Hilton’s U15A boys dished up the shock of the day, reversing their U14 result with a hard won 43-42 win in the final second. While the B and C score lines favoured the hosts, Hilton proved their depth by winning the D and E team games. Michaelhouse’s U14A ballers notched up an emphatic 40-10 win with the B and C team lads following suit. Hilton’s depth was again good, winning the D and E team encounters.

Michaelhouse’s cricketers enjoyed a jam packed week of fixtures, starting with seven midweek games at home against Maritzburg College. House’s U15A boys reversed their U14 result with a 2 wicket win. Chasing 127 for victory and requiring 12 off the last over, College’s U15B batsmen could only knock 11 of them off ensuring the rarest of results, a tie. House’s U15C lads delivered the all-round team performance of the day with every player putting his shoulder to the wheel for their 39 run win. Michaelhouse’s 14A boys finally clicked and were good value for their solid 52 run win. With a win apiece for the U14B and D sides, Chris van Rooyen’s 57 run knock wasn’t enough to help the Michaelhouse U14C side seal an unblemished record over College in the age group. On any day, seven results from seven starts in very wet and misty cricket conditions would be a satisfactory outcome; five of them being wins for Michaelhouse made it all the more satisfying!

There are a number of ways to be sure that you are in the Midlands on a Saturday. One of them is the weather! Three raucous cheers to Hilton College and Michaelhouse for opting to persist with a full set of 14 cricket matches in conditions which might easily have changed their minds. Ten results were unequivocal vindication of the decision.

While the outcome of the third XI encounter will forever remain uncertain, the ‘match abandoned’ result in the first XI game will be a case of the one that got away for Hilton College, who were very much in control when their picnic was rained on. The Michaelhouse U15A boys could lay honest claim to a ‘winning no-result’; as could their younger schoolmates across the avenue in the U14A match where Hilton found themselves with their backs against the wall on 95/6 chasing 144 when conditions became unplayable at 5.30pm.

Nathan Hoatson’s 53 (60) wasn’t enough to help his side chase down the Hilton College second XI’s 223/7. Tom Griffin’s 100* (50), his second ton for Michaelhouse, including a stand of 80 off seven overs with Liam Tibshraeny, steered House’s fourth XI to a leisurely 8 wicket win with three overs to spare. Piko Nkompela’s screw-turning 3/5 in four overs set House’s fifth XI up for the chase. It took all 120 deliveries for his batsmen to reel in Hilton’s total of 91/7 for their 6 wicket win.

Hilton’s U16C and B boys came out on top, despite a captain’s knock from Josh Southwood (64) for House’s U16B side. Weather induced delays meant that the U16A fixture was changed to a 45 over format. Cameron Strudwick’s 3/13 in nine overs and another captain’s innings, this time in the shape of a well-crafted 65* from Basti Hofmeyer, ensured a maiden 15 run win over their old rivals for House’s U16A boys.

The great depth of ability in House’s U14 age group ensured the full house of results over Hilton College. Henry Love’s 55* and Preston Greene’s 56* laid the platform for the U14B side’s 45 run win to wrap up an unbeaten first quarter of high school cricket. Requiring 8 off the last two balls, chasing 103, House’s U14D batsman Callum Kernahan nonchalantly stroked the penultimate ball of the innings over the bowler’s head to go crashing into the side screen. In the aftermath of that shot, two off the final ball was a formality ensuring an unbeaten season for the mighty D team. A win for the U14C boys tipped the overall cricket scales in the favour of Michaelhouse on the day, winning seven, losing three and giving four over to appease the weather gods.