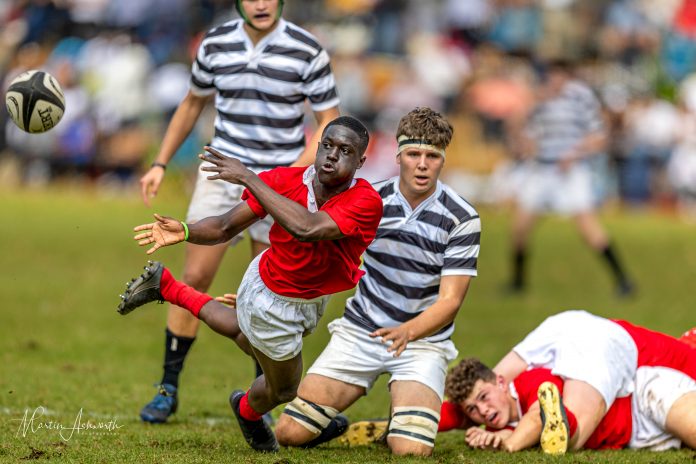 The 203rd showdown between generations-old rivals Hilton College and Michaelhouse was worth the three year wait. There couldn’t have been a greater sense of occasion on the back of the host’s 150th birthday celebrations, and bonhomie and friendly banter on the banks were as much a feature of the day as the rivalry on the field.

Despite a tense 2-2 draw in the U14A fixture and a ding-dong 2-3 loss in the U16A game, the hosts, Hilton College, went into the grandstand event on the Astro with five wins from ten starts on the day and the better early-season form; their 4-0 first XI win setting the scene for the action about to unfold across the avenue on Gilfillan.

Strange to think that for the boys in the age group fixtures, Saturday marked their debut on derby day, the pomp and pageantry being absent since their prep school days. You would be forgiven for believing that House’s U14B and C lads had done it all before though, flinging themselves into the fray like seasoned campaigners, notching up 118 points between them, and giving nothing away. It was more of a two-way street in the A team encounter though with a successful penalty edging the hosts ahead on the scoreboard for their 8-5 win.

Results were equally one-sided in the age group above’s B, C, and D team games, with Michaelhouse helping themselves to 140 points and giving a miserly 16 away. Again though, the A side weren’t able to follow suit going down 3-14.

Hilton’s U16 boys offered a little more resistance but were still not able to come away with a win in the three games ahead of the U16A billing. The visitors never looked like losing and their 19-7 win was a fine display of relentless but patient schoolboy rugby. The penultimate match of the day was another controlled win (14-8) for the visitors and anyone inclined to have a flutter on the outcome of the first XV game may have started to feel a little more confidence in their wager.

But as any wise punter knows, his money is safest in his pocket at a Hilton, Michaelhouse. The hosts scored early, and might have turned the contest into a rout but for House’s never-say-die defence, and indeed their temerity in scoring twice ahead of the interval. With both teams in the hut for oranges and House just a score away from an upset, a Hollywood script-writer couldn’t have penned a more tense half-time scene. Poor place kicking was a thorn in the side of both teams, which suited the thousands-strong crowd just fine because the ball found more airtime through the hands. Two tries, very much against the grain of play in the second half nevertheless sealed the deal on Hilton’s 94th win over Michaelhouse, 32-17. Will Michaelhouse find their elusive 100th win in the return game? We’ll know as the sun sets on 18 June.