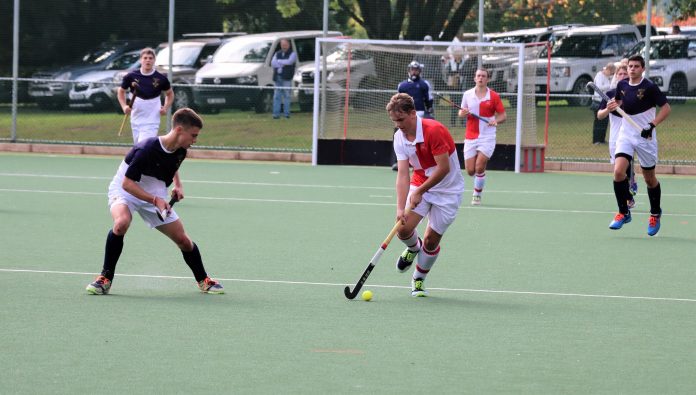 May 2019, the last time Northwood and Michaelhouse went toe-to-toe felt like liftetimes ago going into last Saturday’s meeting in Balgowan between the two schools. The rivalry going back to 1990 is relatively young in terms of KZN schools but didn’t in any way diminish the intensity out on the park.

It was one-way traffic on the Aitkens ad Punchbowl Astros where the visitors enjoyed a clean sweep of the open age group fixtures, winning four from four including a workmanlike 3-1 win in the first XI game. House’s U16A lads were able to stem the tide with a rugged 3-3 draw but that was the only silver lining on the results table in the age group. The youngsters in the Michaelhouse U14A side, coming out of a successful set of fixtures over Easter were clattered back to ground with a 0-2 loss. House’s B and D sides chalked up wins, but the B team boys were not able to follow suit.

Out on the rugby field Northwood’s much vaunted age group teams came up against slightly stiffer opposition than they might have anticipated. Northwood’s U14A boys delivered a mature, clinical dismantling of the hosts, mixing up their game and running in tries from just about anywhere for their 35-5 win. It was one way traffic for Michaelhouse in the U14B and D games with the C teams contenting themselves with a 19-19 dead heat.

In the age group up Michaelhouse’s U15A boys blew their lead in the dying exchanges to go down 25-21. The B team also went down narrowly in a 13-14 nailbiter, while the C and D teams came away with home field wins. Michaelhouse notched up one tick each in the W, L and D columns in the U16B, C, and D encounters respectively. The grandstand event of the day was without any doubt the U16A clash. Northwood, pound for pound bigger and heavier than their hosts, manhandled Michaelhouse about the park but could never get their noses ahead. Emulating their U16 hockey coevals Michaelhouse had to settle for the 26-26 draw, although it was the prevailing sentiment that despite being bashed and bruised about, House were unlucky not to have come out on top.

House’s open rugby lads were as dominant as the Knights were in the open hockey fixtures, piling up 210 points and conceding just 12 between the second, third, fourth and fifth XVs.

House’s first XV boys had plenty on the agenda. Their first full home ground fixture since the June 2019 Michaelhouse, Hilton clash was the backdrop to their seventh game of a so far successful season. Their tails were up and they had the added incentive of playing in front of their grandparents, wrapped up on the banks of Meadows taking in their first visit to the school in a very long time! Thoughts of avenging their 13-20 loss in 2019 – just the second ever to Northwood – would have been somewhere on their minds too.

Andisa Young stroked a penalty through from 27m out early on to settle the jitters. Any understanding of the game underpins the importance of a reliable kicker on the team and poor place kicking on tour was threatening to become a real headache for coach Grant Ball. Running a deadly straight line, centre Campbell Ridle then cantered over the line in the 11th minute for a converted try. Instead of rolling over though, the Knights struck back with a try and a penalty of their own and the second quarter of the game then saw both sides locked between the twenty twos with the visitors absorbing plenty of hard running off the Michaelhouse number nine.

A side stepping loose head prop is a dangerous animal, especially when he has a nose for the line. House’s front rower, Thabo Njapha, extended the lead very early in the second stanza for another converted try. Northwood’s second half lineouts were a cause for concern especially in the context of scrum-time being a lottery with both sides alternating total dominance of that space depending on their mood. In the end, Young’s performance off the tee was flawless and by the time big running No8 Dwayne Mlaba thundered over the line after lock Duncan Davies-Webb and winger Andisa Young had hammered the first nails into Northwood’s coffin, the result was beyond any of the doubt which might have crept in at half time. Michaelhouse 38, Northwood 18.