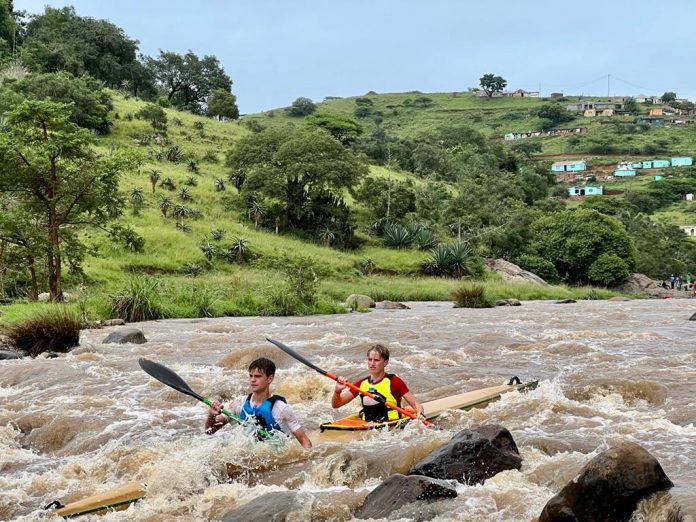 A second week of cricket weather on weekdays and water sports conditions on cricket days meant that 15 cricket fixtures against Clifton College and the golfing showdown between Michaelhouse and ‘Maritzburg College were washed out over the weekend.

Basketball barrelled on in the indoor centre where Michaelhouse were in imperious form over visitors Clifton College, winning fifteen from fifteen including solid wins for the U16A (48-8), U15A (30-14), and U14A (26-7) sides. House’s U15C lads were in an especially competitive mood winning their clash 76-0.

The first three periods of the first team encounter were a pedestrian spectacle, with Michaelhouse only able to convert a mountain of possession into a molehill of points. Skipper Lucky Mabuza’s boys couldn’t miss in the final stanza though, nailing three pointers seemingly at will; and with mounting confidence, frustrating rebounds became crowd-inciting points. The scoreboard, no longer stuck in the mud, ticked over furiously until the final second for the home team’s 80-23 win.

Next door, in the aquatics centre, the spoils were being more equitably shared. Clifton dominated the open age group winning everything on offer going into the first team game. The much fancied visitors opened the scoring but were forced to content themselves with trading goals all the way through to midway into the third chukka. The home team faithful were just starting to believe that the upset of the season might be on the cards when the sheer weight of class turned the tide. A late goal from Michaelhouse could do nothing to avert the final outcome, a 9-5 win for Clifton College.

The Michaelhouse age groups were able to stem the Clifton tide. Proving their pedigree, House’s U14A boys followed up the B side’s win with an 8-3 victory of their own; while a little later in the morning, the U15A (7-2) and B (8-5) lads were able to do the same.

Michaelhouse’s canoeists revelled in the high water levels on Saturday paddling into second (Reuben Baldry) and fourth (Robert Butcher) in the U18 event of the Dash and Crash on the Upper Umgeni, which also doubled as the first race on the 2022 interschool race calendar. Aidan Furby crossed the line in first place with Louis Souchon in third in the U16 event while Jess Webber placed third in the U14 age group. The following day Rob Butcher partnered Dom Furby into third place in the U18 race of the Campbell’s to Dusi Bridge event, while Rourke Murray and Stuart Neilson claimed first place with Louis Souchon and Aiden Furby just behind in second place in the U16 race.

Photo:Michaelhouse U16 paddlers Louis Souchon and Aiden Furby taking on Mission Rapid in the Campbell’s to Dusi Bridge race on Sunday.