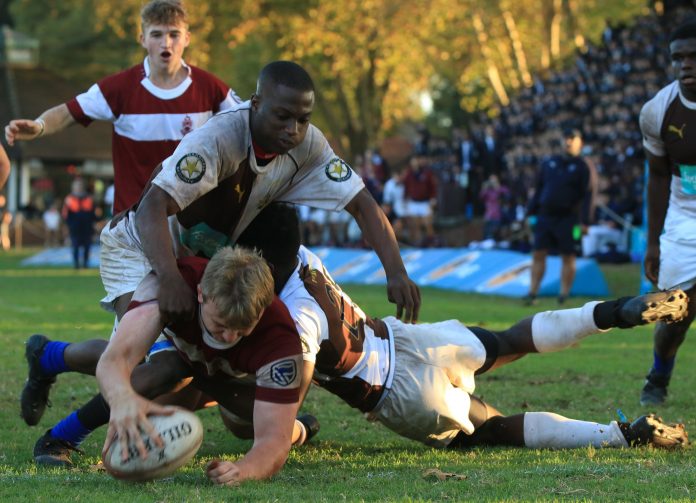 Kearsney hosted Northwood for their annual FNB Classic Clash in Botha’s Hill on a sunny afternoon in ideal playing conditions. Kearsney dominated play in the first 25 minutes, enjoying the lion’s share of the territorial battle. The pressure ensured three converted penalties by Matthew Bergset for a 9-nil lead within the first 15 minutes.

The hosts were rewarded with an unconverted try in the left corner by winger Lihle Maqhugula after some good work by the attacking team and good interplay between the forwards and backs. Maqhugula still had a lot to do after receiving the ball, and showed good pace to dive over for a 14-nil lead.

Northwood kicked too long from the ensuing kick-off and Kearsney used the possession well to get back into the attacking zone. The hosts were awarded another penalty from a breakdown infringement which Bergset converted for a comfortable and deserved 17-nil lead.

Kearsney then seemed to lose focus and Northwood found renewed intensity, to eventually find themselves deep in Kearsney territory. The visiting captain elected a scrum from an awarded penalty. The desired outcome was achieved from a well-rehearsed backline attack move, to score close to the upright for a converted try to decrease the deficit to 7-17.

The last few minutes of the half were a territorial kicking battle which did not lead to much and the halftime whistle followed soon.

Northwood produced a purple patch, scoring two tries from good tactical play and some poor tackling by some of the home team defenders. The first try came from a poor exit kick by Kearsney and hard running by the counter-attack backs. From the breakdown close to the Kearsney line the visitors moved the ball to blind side and dived over for an unconverted try.

Soon after that, Kearsney launched a superb attack from a lineout from their own 22m and progressed close to the opponents’ 22m, but the ball was turned over at the breakdown.

Northwood kicked the ball to escape the pressure, but it bounced favourably for the chaser after some poor defense by the Kearsney players. Northwood’s player ran 40m to score an unconverted try to level the scores at 17-all.

Kearsney regained composure and soon an opportunity was seized by flanker Salu Mqobongo who outsprinted the defense for a good 60m, for Bergset to convert and regain the lead at 24-17.

Some exciting although error-ridden passages of play followed as both teams were motivated to clinch the match. Kearsney used their opportunities better and eventually eighthman Cameron Roache displayed some power work from a breakdown close to the visitors’ line when he picked from the base to dive over. The lead was extended to 29-17 with only a few minutes left on the clock.

Northwood didn’t give up and attacked up until the last minute, but the hosts defense held and they remained victorious 29-17.

The Kearsney – Northwood fixture is always a great game which is fiercely contested; and this game was no different.

Northwood started extremely well, being very patient in their defence and counter attacking with precision. Kearsney struggled to find their rhythm in the first two chukkas, not creating any decent chances. After the first half the scores were level without a goal being scored, but Northwood definitely had the better chances.

The second half started with Kearsney on the front foot creating numerous chances but nothing good enough to beat the Northwood goal keeper.

Although the final score finished in a goal-less draw the game definitely wasn’t as uninteresting as the score line suggests. Both teams gave it their all in a closely contested match.