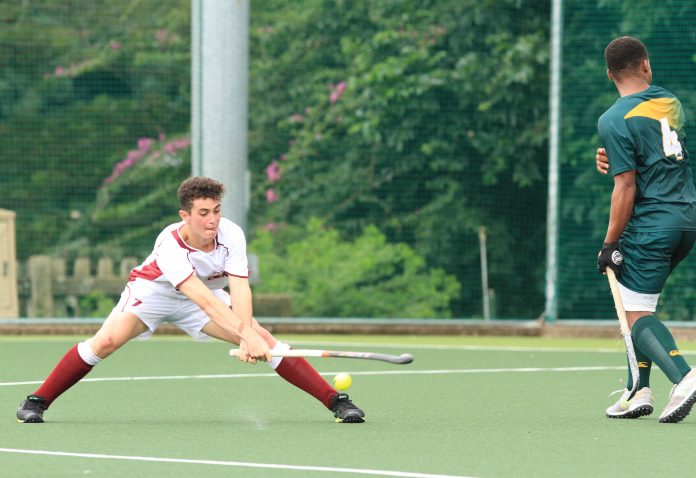 Glenwood hosted Kearsney on Saturday in somewhat damp and slippery conditions. The hosts enjoyed a dream start from a counter-attack from a misguided kick from the visitors. From the first breakdown they attacked the small side with great off-loading skills, which saw the evasive right winger Ronaldo le Fleur scoring close to the uprights for a 7-point lead in the first minute of the match.

Their second try followed shortly, with a good line from the full back from a right-hand scrum penetrating the defense and linking masterfully with the outside backs for a spectacular try in the left-hand corner. This stretched the lead to 12-0 in the 10th minute of the match.

Kearsney responded well though, and soon afterwards gained a Matthew Bergset penalty from sustained pressure and good breakdown work by eighthman Cameron Roache. Kearsney then enjoyed a good passage of play and was rewarded with a converted try by flanker Matthew Campbell who dive over from pick and go plays by his fellow forwards.

The score of 12-10 for Glenwood remained fom some time and Kearsney missed a golden scoring opportunity when, in an attempt for a lineout maul, a penalty was kicked over the dead ball line.

Soon after Glenwood scored their third try from accurate chip kicks and were perhaps somewhat fortunate when the Kearsney cover defense slipped, presenting the Glenwood centre an easy pickup to score under the posts. That stretched the lead to 19-10 which was also the half-time score.

Glenwood started the second half very strongly and after seven minutes winger Le Fleur scored his second try after sustained pressure on the visitors’ goal line and quick ball shifting on the blind side.

Eight minutes later Glenwood scored their last converted try from yet another failed attempt at finding touch from a penalty kick.  The hosts launched a good counterattack which stretched from side to side with impressive tempo and good interplay between forwards and backs. Flyhalf Drico Marx eventually scored, converting for the final score line of 31-10.

Glenwood enjoyed the territorial advantage for the remainder of the match but credit must go to the disrupted Kearsney team who defended well and never stood back for the physicality of the hosts. Outstanding players for Kearsney were hooker Devahn van der Walt, captain and flanker Jason Brien, eighthman Cameron Roache and scrum half Matthew Bergset.

Kearsney carried their form from the KES Easter festival into their fixture against Glenwood, scoring early in the game through a well-executed penalty corner. Glenwood equalised almost immediately through a great team goal, to level the scores 1-1 after the first chukka.

Glenwood raised the intensity in the second chukka trying to disrupt Kearsney’s build-up play. Kearsney remained calm however, kept possession and scored through eventual man of the match Jacques Minnaar.

Both teams created numerous chances with play moving from end to end. Kearsney had the stronger defensive of the two teams, preventing Glenwood from having any real scoring opportunities. Kearsney were clinical in the attacking 25, with Minnaar scoring a hat-trick.  Other goals were scored by Bryce Wiggett and Asande Nyawose.

Kearsney dominated the final two chukkas, finishing the game with a comfortable 6-1-win.

Four members of the SA Men’s Hockey team which played in Buenos Aires at the weekend had Kearsney College connections, either as players or coach.

South Africa are participating in the tournament for this season only as a stand-in for Australia who withdrew due to COVID-related travel restrictions.