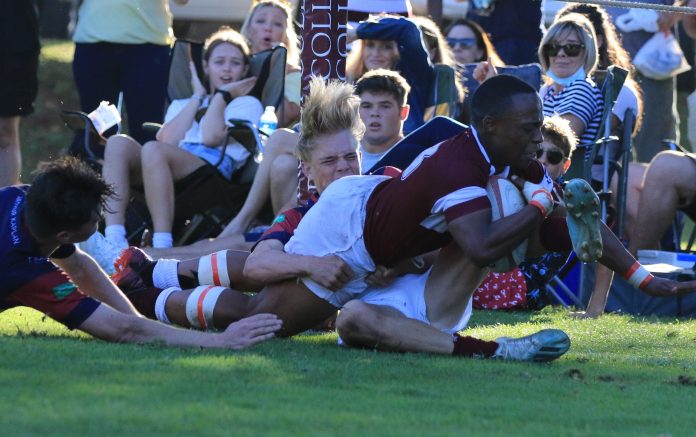 Kearsney scored first in the 6th minute after some good interplay between backs and forwards. The ball was moved to right winger Likhona Nunwana, who scored in the corner, and scrumhalf Matthew Bergset converted for a 7-0 lead.

After receiving the ball from kickoff, Kearsney transferred the match into the visitors’ 22m area. Relentless pressure ensured a penalty, which setup a Kearsney lineout 7m from the goal line. Prop Sani Sawuti dived over from the lineout maul, to stretch the lead to 12-0.

Westville responded with greater structure and were eventually rewarded with an unconverted try in the left corner, to shrink the deficit to 5-12.

The next Westville try came from a 22m blunder from the hosts, when they attempted a short kick to a teammate. It was intercepted by the visitors’ centre, to score untouched under the cross bar to level the scores at 12-all.

Kearsney responded with a penalty and led 15-12 with seven minutes of the half remaining. Westville capitalised on some pick and go close to the Kearsney goal line in the last minute of the half, to lead 17-15 at half time.

The second half was tightly contested with both teams displaying resolute defenses. The attack was marred with handling errors as fatigue set in. Kearsney scored an unconverted try by centre Ayabonga Mngaza three minutes from the end, which resulted from a turnover scrum and some intelligent play by fullback Nhlakanipho Ngubane.

From the kickoff receipt, Kearsney managed to kick the ball into the Westville half, which in return launched an attack. Kearsney was penalised and advanced a further 10m in a moment of poor discipline.

The visitors managed a lineout maul 7m out from the goal line and, with their makro pack, managed to pick and go for an unconverted try.  That concluded the match with Westville victorious 22-20.

It was an exciting match to watch with the lead changing on many occasions. Players who stood out for the home team were captain Jason Brien, winger Likhona Nunwana and locks Matthew Campbell and Cameron Roache.

Being the first game of the season for both teams, it was no surprise to see the intensity from the start of the match. It was clear both teams wanted to dominate the first chukka and try get the upper hand, with numerous chances on both ends of the field.

Kearsney had the better of the first two chukkas and managed to score in the second chukka to go 1-0 up. It was a great team goal with very good build up play and finally finished off by Jacques Minnaar.

In the 3rd chukka the tide turned, and Westville got the upper hand. They controlled possession and made it difficult for Kearsney to get any control of the game. Westville scored the equaliser setting the 4th and final chukka to be a thrilling 15 minutes of hockey.

Kearsney scored with about five minutes left in the game. However, after the goal was awarded, the umpires decided it would not stand. Westville took advantage of the situation and moved the ball into the Kearsney half of the field, finally scoring the winning goal.