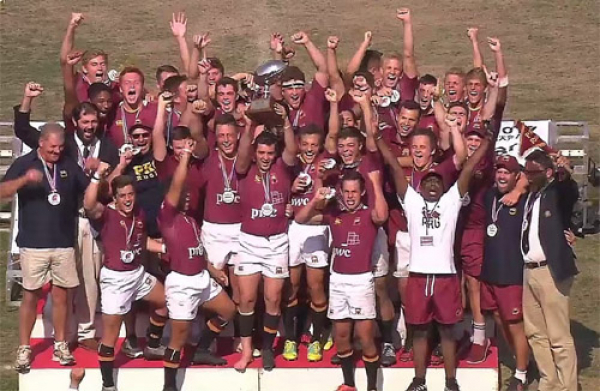 SA School Sports Magazine spoke to Paul Roos director of rugby Ryno Combrinck and asked the school’s rugby mentor to tell us about their success in winning the Sanix international rugby competition in Japan earlier this season.

“Jono, it was an incredible experience for both the coaching staff and boys. The Japanese are wonderful people and reminded us about the values that matter.

“It was most probably also the best-organised tournament I have ever attended. We are delighted that the rugby went well, but new friends were made and we are very grateful for that too.”

I mentioned to Ryno that thedirector of rugby, and indeed the first XV head coach, at any school, never mind a major South African rugby school like Paul Roos, have many responsibilities.

Soin using the Paul Roos first team head coach Marinus Pretorius as an example, who are his specialist first XV support staff that free Marinus up to focus on his primary areas of add-value (his well-respected rugby expertise) to the school’s flagship team?

“In Marinus Pretorius, our first XV coach we have an experienced teacher and coach, and similarly with (assistant coach) Koos Eksteen. Marinus guides the forwards while Koos mainly focuses on the backs.

“Tassie Pieterse is our experienced manager, Hannes Prinsloo is in charge of our conditioning and Fanie de Klerk is our physiotherapist.”

Clearly Paul Roos have covered all the bases and a successful team usually means a harmonious management team.

A rugby season at any school is a busy time of the year, not to mention all the preparation from both the first team squad players and the coaching-management staff in their respective roles. Come to think of it, it’s a heavily involved time of the year for the rest of the premier age-group sides too.

So from a Paul Roos standpoint, how do you manage the players to ensure that they are in a good space, able to carry the load physically as well as mentally so that they don’t lose their spark – their rugby hunger – due to fatigue?

“Jono, every rugby season brings new challenges – and 2019 is no different. What is becoming increasingly difficult are the ‘outside noises’during the month of May; that is the trials, provincial selections, (player) agents and of course the school exams.

“Most coaches will experience these issues, and one will always hope that maturity, and good leadership in a team – and the parents – assist the boys to remain grounded and together.

“The rugby sessions are adapted around trials matches, injuries etcetera. There is no silver bullet, however, and often good plans go out the window due to unforeseen injuries and other circumstances.”

Ryno, you response leads me into a follow-up question, apologies for it being so loaded!

Regarding your first XV and premier age group sides, injuries, winter illnesses and the “curve balls of life” will happen – it’s the nature of the game – and life – at every level. Taking these rugby realities into account, plus the myriad uncertainties and outcomes that life’s challenges bring to us all, how important is it for you to have as strong and well-balanced a squad as possible, paying particular attention to the boys who are not necessarily regulars in the match 23 but may be called upon at any time to successfully plug the gaps?

“Jono, it’s not only schoolboy coaches who appreciate depth. Depth is also very important at international level. A positive of not always having depth is that it creates opportunities for boys who often do not get a chance to represent a school’s first team.

“It obviously challenges a system, but it’s absolutely wonderful when boys do grab their chance with two hands. It’s not easy being a second team player in any school but when there is good synergy between teams it helps.”

Ryno has enjoyed a long spell in schoolboy rugby, having been prominent in Pietermaritzburg’s St Charles College rugby set-up before moving up the hill to the picturesque Kwazulu-Natal midlands environs of Balgowan and the stunning vista that is Michaelhouse, and now Paul Roos within a Handre Pollard place-kick of Maties rugby in stunning Stellenbosch. So SA schoolboy rugby – it’s an arena of the game that Ryno knows better than just about all of us.

But it’s never far from this outstanding former rugby player’s mind that as a trained school teacher he appreciates there is a much bigger picture involved.

It is also the nature of South African schoolboy rugby that there is a huge following and intense interest from the rugby public in the matches, which as we all know are televised on major TV channels as well as the now ever-present live streaming of big clashes on every given Saturday.

It’s a given that Paul Roos have always been right up there in the public eye, but one would be not far off the mark in thinking that the 2019 Paul Roos first XV have caught the eye of many a knowledgeable schoolboy rugby fan – possibly to an even greater degree this season – for their brand of entertaining, effective, attractiveand, by extension, winning rugby, which includes the international tournament success.

As a result, the spotlight is obviously pretty intense on Paul Roos and its young men in-the-making every time they take the field. So what does Paul Roos, the school, do to help the boys stay balanced with respect to their schoolwork – and how does Paul Roos assist the boys in dealing with the obvious interest rugby folk have in them?

“Jono in terms of the rugby, we see it as a compliment to have a ‘target’ on our backs. We aim to inspire, and if there are those that think we do, then it’s great.

“As a school we take great pride in the balance our education provides, and therefore our academics are pretty important, and our boys know that.

“Along with the rest of the teachers, we challenge the boys to manage their time well. It must also be said that our academic staff show great understanding and assist the boys where they can.

“On our recent trip to Japan, some boys wrote tests in Hong Kong – and then most wrote again in Japan. They were obviously aware of the tests and had to prepare for it. While rugby is important, helping boys to achieve marks which will allow them the option of going to tertiary institutions is more important.”

Facilitating attractive, entertaining and effective rugby – is this one of your primary goals in order to keep the boys fully engaged when they are busy doing the hard yards on the practice pitch and then on match day?

“Boys who choose to play rugby know that it’s physically and mentally tough – and very challenging at times. They also know it is a traditional South African sport, which most people can relate to. The ‘nature of the beast’ also allows for great war stories, while most shapes and sizes can find a place in a team.

“The rugby we want to play is where boys can express themselves in a team environment. We would like to enhance the enjoyment factor but it’s not always that simple.”

The following question does not necessarily apply to Paul Roos but perhaps addresses a wider look at the SA schoolboy rugby set-up.

It has been remarked on that too many SA schoolboy first XV and premier age-group teams, arguably the most promising, talented boys, appear to be “over-coached” to the point where the boys find it difficult to modify the game plan during a match and “play what’s in front of them” without the coach’s input from the sidelines.

It also appears at times that these talented boys don’t have the courage and freedom to play with instinctive flair and the necessary built-in confidence to counteract what’s unfolding in front of them. As you well know, many a team’s promising start to a match can be undone – at least in part – due to factors of this nature.

In your coaching, how do you try to balance the necessity of the Paul Roos pre-match game plan while at the same time instilling in the boys an ability to read and correct a situation as fast as possible during a match so as to ensure a successful outcome?

“It is sad but true that some boys, due to coaching, simply cannot think for themselves. I often wonder if it is because headmasters, coaches etcetera are under pressure to win, or if coaches are coaching stuff they see on TV but don’t understand what they see.

“It must be remembered, though, that rugby cannot be played without structure and a simple lineout or scrum proves the point. Even the Barbarians, whom are seen as a free-flowing team, have structure. We back our boys to make educated decisions and to give it a go. Sometimes it works and sometimes it doesn’t.”

Of course, no matter how thoroughly a coach prepares his boys pre- and during- season, he can’t actually don the first XV match jersey on game day and get into the thick of the action. With this in mind, how important is the player-leadership group to the Paul Roos success story, particularly looking at the first team in this regard?

“All the successful teams I have been fortunate to be involved in always had a strong group of leaders. The influence of the leaders is massive at scrum and lineout time, and obviously also for attack and defence.

“We would also have a player in charge of breakdowns or certain aspects of the oppositions’ game. What is not spoken about often is the off-the-field leadership. Off-field leadershipis critical to the team’s success – and especially during difficult times.”

8 One common trait that troubles virtually every SA schoolboy side is the difficulty in maximising the benefits of territory and possession, and turning those advantages into points. A mix of great line breaks; solid platforms established at the set-pieces; quick, quality ball at the breakdown; a varied group of game-breakers (i.e. a 9, a 12. an 8, a 2 for example) present a score of opportunities to add value on the scoreboard – yet all-too-often they are not capitalised on. Are these facets among your focus points at training?

“It’s risky to spend lots of energy on a few players, as they might breakdown – and then it’s all panic stations. One has to establish, if you coach, what you want, which is more difficult, or what you have in terms of player talent.

“The latter of the two views on coaching will dictate where you will spend your time. Your game-breakers – via good feet, physical or special skills – should be balanced with those players who actually do the work. Too many Quade Coopers in a team won’t win you the World Cup.”

In terms of the Paul Roos first team goals for the season – what aspects comprise your and the team’s objectives in 2019?

“Our aims have not changed. We aim to inspire through our attack, defence and behaviour. In all three aspects, we have scored ourselves 3 from 3 at times this season, but sometimes we have not judged ourselves as having got all 3 right. We will continue to seek the top scores (3 from 3) by which we measure ourselves.”

As far as player-specific aims and challenges for the season, by what criteria do you measure each boy?

“One must be careful not to treat boys like professionals. Analysis paralysis often leads to blaming, and not coaching. I fear that lots of squads are squeezed until nothing is left at the end of a season, the result being that boys are relieved their rugby is finished forever. My interest is broader and an attempt to manage the overall contribution of each player.”

Thanks for your interesting insights, Ryno, SA School Sports magazine and website wishes you and Paul Roos rugby all the best.