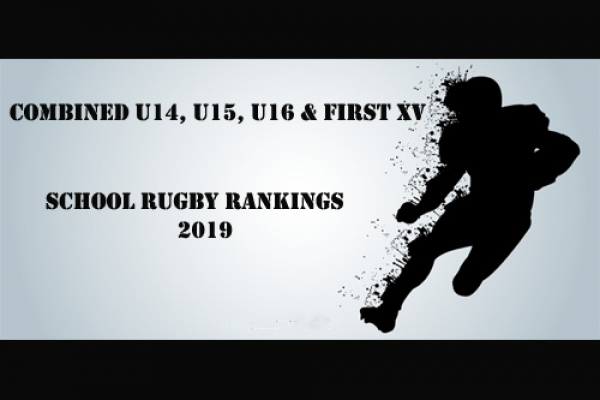 Yet another school rugby season has come and gone and as has become the norm some brilliant rugby has been played across all the age groups.

Many a school rugby enthusiast has been seen scratching their heads this year asking the same question: “With all this talent available to South Africa at the schoolboy level, why are we not dominating the sport at international level?”

That is the million dollar question which has just as many answers it seems as each year a new wave of talent seems lost for one reason or another.

However challenging that mission is, one reality that is guaranteed is that the schools, coaches and players are doing their part in providing a pool of players that will keep the strong traditions of rugby beating strongly in South Africa.

As is the practice at SA School Sports we have combined all the rankings to produce a Combined Rankings for 2019. These rankings include the First XV’s, U14’s, U15’s and U16’s which serves to illustrate the all round rugby strength of a school.

What is noticeable is that in some cases a school may well have a strong team in a particular age group but fail to keep that position in other ages which ultimately has affected their overall standing.

Taking in all the average bonus points achieved by the various age groups we have Grey College taking the top spot just ahead of Paarl Gim as they did last year.. Across all the age groups Grey proved to be consistently at the top with their U16’s, U15’s, U14’s and their First XV, performing better on paper than Gimmies which gave them the edge.

These rankings take into consideration factors such as strength of opposition, margin of victory, margin of loss, losing with 10 points, actual points scored on the field, actual result (W/L/D), home/ away status and others. Each factor allows a team to earn a prescribed amount of bonus points which are ultimately ranking the teams.

For the handful of critics, be gentle and remember as with all rankings surprises and upsets do take place, Japan did beat the Springboks!