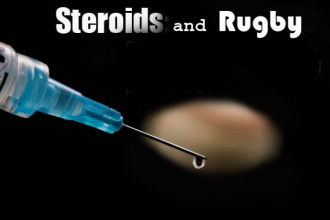 The butcher in Salmon van Huyssteen’s home town did more than sell meat.

It also operated as an informal post office, a collection point for parcels and packages in his Pretoria suburb.

In September 2012, a delivery arrived for Van Huyssteen.

Then 16 years old and a promising number eight, he wanted to fill out his frame fast. But instead of steak, sausages or some other protein hit from over the counter, a small container, wrapped in tape to hide the contents, waited for him in the back.

It had been sent by his body-building cousin and was collected by his parents. That same evening, Van Huyssteen’s mother took a syringe and injected him with a millilitre of the product, named ‘Deca 300′. In the morning, she did the same again.

A year later, Van Huyssteen was part of an excited band of teenagers collected together at Loftus Versfeld, home of the Bulls, Pretoria’s Super Rugby team.

Wearing the garish green, red and yellow blazer of his prestigious Afrikaans Boys’ High School, he crowded close to his new team-mates as a photographer captured their call-ups to the Blue Bulls under-18 side.

They were to compete in Craven Week, perhaps the world’s most famous showcase of elite teenage rugby players.

Televised by South Africa’s biggest broadcaster and sponsored by a global soft drinks giant, it draws in overseas and local talent scouts to watch the age-grade sides from the country’s biggest teams face off in a week-long festival format.

Alongside Van Huyssteen in the squad photo was RG Snyman, who would go on to play in South Africa’s World Cup final win over England in 2019, and Ivan van Zyl, another future Springbok.

But any plans that Van Huyssteen had of following a similar path were derailed.

A sample given to anti-doping officers at Craven Week showed traces of the steroid nandrolone, two times over the World Anti-Doping Authority’s permitted limit.

Van Huysteen appealed unsuccessfully against a two-year ban. World Rugby’s lawyers had questions over his story.

If, as he claimed, his parents had stopped using it after those first two injections, why was nandrolone still present in his system at such high levels 10 months later? Why was the container still in the family’s fridge?

As for the question of why he took the drug in the first place – there is perhaps an easy answer. But it wouldn’t tell the full story.

“Steroids are going to give you everything that a young rugby player would want – strength, power, speed,” says Dr Jon Patricios, a past president of the South African Sports Medicine Association and a former team doctor to the Cats and Golden Lions teams.

“It is going to make you a much better athlete, regardless what position you play. Those are the benefits. What these young players don’t realise are the side effects.

“Steroids can affect almost any system in the body, but most are hidden. Blood pressure, changes to the heart, sugar and cholesterol levels, potential infertility, liver, kidneys, psychological damage – almost every aspect can be affected.

“That is what they are not too concerned about, because they can’t see them.”

Van Huyssteen is not the only one to run the risk.

All were teenage rugby players who tested positive for steroids at the 2018 edition of Craven Week. It was no blip. The event has turned into one of the most reliable hunting grounds for anti-doping officers.

It would be more surprising if all these schoolboys turned out to be clean.

A survey of more than 12,000 boys in 23 rugby-playing schools in South Africa’s KwaZulu-Natal province in 2014 revealed that almost a tenth of 18-year-old boys had tried steroids.

One prominent Johannesburg school offered an amnesty to its pupils, encouraging them to hand in unused steroids and turn things around.

The director of rugby at a school in Cape Town was suspended last year after a former pupil claimed he was helped to inject steroids. The director has denied the allegation.

Dr Patricios has been visited by parents who want advice after discovering cooler bags of potions and pills under their sons’ beds.

“A lot of it is pressure that builds in making an elite sports team or the first XV rugby team,” he says.

“That pressure may be internal from the boys themselves, or from their parents or peers, and certainly a significant amount of it is from the coaches.

“There are cases where coaches will tell players they need to pick up 10kg before the start of the season if you want to make the team.

“There is that sort of innuendo that the kid interprets as them needing to ‘bulk up’ to make the team.

“I honestly believe that there are coaches and headmasters who are turning a blind eye, and I think there are parents who turn a blind eye. Not all parents come to see me.”

“Anecdotally people tell me it is happening all over schoolboy rugby,” he tells BBC Sport.

“There is a demographic of schoolboy whose great ambition is to become a professional rugby player and there are absurd amounts for contracts.

“Even if that doesn’t happen there is the possibility of being poached by another school, where the bursary system would see part of your fees being paid. There is an enormous incentive to excel – to be faster, bigger, stronger, better.

“But what you have to also understand is that a lot of schoolboys are taking ‘juice’ for vanity, not performance. It is because they want to be big and buff. That also comes into it.

“There is a big gym culture in South Africa. People love the outdoors and the beach and the guys want to look big.”

It is an aesthetic the Springboks have perfected.

In the build-up to to the Rugby World Cup, a photo of the champions-to-be went viral. Apparently shot in the aftermath of an intensive training session, the squad are stripped to their shorts, gleefully showing off a collective mountain of shrink-wrapped, shredded muscle.

Admiration was not universal.

One Twitter user shot back with a GIF of peak-dominance Lance Armstrong making his infamous ‘zipped-lips’ gesture during the 2004 Tour de France. The syringe emoji was also given an extensive work-out.

Despite none of the Springbok World Cup squad ever having tested positive, South Africa’s schoolboy steroid tests have fed into a subculture of suspicion.

But they are not the only factor.

Aphiwe Dyantyi picks up his breakthrough player of the year award at the World Rugby Awards in Monaco, a little more than seven months before his positive doping test

Aphiwe Dyantyi, International Breakthrough player of the year in 2018, was not part of that Springboks gym group shot.

The 25-year-old wing, who made a try-scoring debut in June 2018’s win over England in Johannesburg, tested positive for a sophisticated cocktail of banned substances a little over a year later.

As he waits for his hearing, so does Chiliboy Ralepelle.

The hooker, who preceded Siya Kolisi as the first black player to captain the Springboks when he led them in a non-cap match against a World XV in 2006, is facing the third anti-doping ban of his career.

For Ralepelle, now 33, another ban would surely mark the end of his playing days. For Dyanti, perhaps not.

During his time with Munster, current Springbok coach Rassie Erasmus decided that a served steroid ban was no reason not to sign second row and compatriot Gerbrandt Grobler for the Irish province.

Grobler has since moved to Gloucester where the head coach is Johan Ackermann, another former Springbok who served his own two-year doping suspension.

The day after his own two-year ban expired, Van Huyssteen was back in the Blue Bulls set-up as a replacement in their under-19 team.

The incidence of doping in South African rugby and the speed with which offenders have been reintegrated prompted questions during the World Cup. And not only of the Springboks.

Ireland back row CJ Stander, a star turn at Craven Week in 2007 and 2008, was asked about his experiences of youth rugby and drugs in his homeland.

“It’s something that, if you want to go look for it and you want to do it, it’s probably there,” he said.

Two days earlier South Africa’s then forwards coach Matt Proudfoot, now with England, had made a strong defence of the testing regime his players were put through, but admitted he “understood why the narrative is there”.

Patricios believes that the positive tests at Craven Week come because South African youth rugby builds so momentously towards that one week, rather than being indicative of a malaise that has spread to the upper reaches.

“Craven Week is pretty much a watershed. If you break through at that level you are going to be noticed, pulled into the Varsity Cup system, contracted to unions and the path is easier for you,” he says.

“Those kids that don’t break through then and make it later are few and far between.

“As soon as these players enter the professional ranks they are subjected to regular squad and random testing, not only by South African drug authorities but also in other countries, for Super Rugby fixtures for instance.

“You are tested regularly and it is difficult to get away with it.”

Drugs in sport: Dangers of doping in rugby

Rugby is second only to athletics as the most tested sport in South Africa. A total of 342 tests in rugby last year unearthed 16 offenders. All but two were for steroids.

By comparison, UK Anti-Doping carried out 837 tests for the Rugby Football Union in England alone during that time. Across a total of 11,922 tests in all different sports, only eight athletes returned positive tests for illegal steroid use.

But those stark stats are no reason for northern hemisphere complacency or condescension.

The majority of UK teenage players are educated, rather than tested.

Daniel Spencer-Tonks, a former England Under-16 rugby union player banned for four years for steroid use in 2015 at the age of 20, warned that doping was “hugely widespread through all levels of rugby”.

In the wake of Sam Chalmers testing positive for two anabolic steroids while on a Scotland under-20s training camp in 2013, a 19-year-old Scottish National League player told the BBC that illegal drug use was rife north of the border as well.

On his way out of the Wales door this November, head coach Warren Gatland said he had suspicions over one of his players during his time in charge.

“I cannot comment on how South Africa compares to other countries. I have no data to support such comparisons,” says Khalid Galant, chief executive at the South African Institute of Drug-Free Sport.

“Sport is only a mirror of our society. Currently in South Africa we are dealing with lots of corruption and ethical breaches at the highest level of leadership.

“Our society may be becoming more tolerant towards cheating as a means to achieve goals because there is also an absence of consequences.”

Van Huyssteen, Ralepelle, Grobler and Dyantyi have certainly felt the full implications of their offences. For unknown others, in South Africa and beyond, Galant is right.