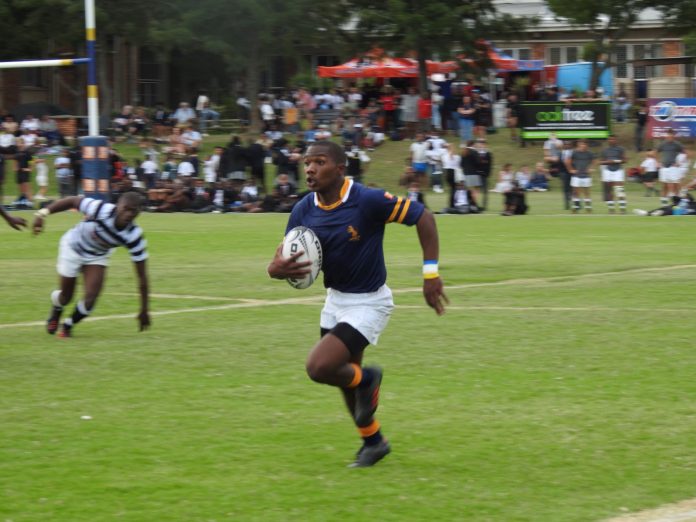 Graeme and Selborne capped a pulsating day of schoolboy rugby as they played out to a fiery 7-7 stalemate in another highly successful Graeme College Rugby Day, sponsored by Buco, in Makhanda on Saturday.

The 23rd edition of this Eastern Cape event was back on track after last being played in 2020, just before the Covid-19 lockdown, and drew thousands of spectators to the Somerset Field.

There were some fascinating contests during the day, with two significant results for Grey High and Framesby, who overturned defeats two years ago against Brandwag and St Andrew’s respectively by narrow margins.

The feature match saw hosts Graeme set themselves up for a tilt at East London powerhouse Selborne and although there were not many tries scored, it proved to be a fitting finale to the programme.

In fact, Graeme had a chance to pull off victory when they were given a penalty just inside the Selborne half after the final hooter had gone. Flyhalf Lagon Oerson opted for a shot at the posts, but his valiant effort dipped just below the crossbar and Selborne decided that was enough and put the ball into touch to finish deadlocked at 7-7.

Earlier Graeme’s Asemahle Mbanga scored a thrilling try when he picked up a cross-kick and raced through untouched for Oerson to kick the conversion.

Selborne hit back in the second half from a five-metre lineout when burly prop Aedan Gentle powered over and Kyle van Wyk added the two points.

Graeme were forced to defend desperately late in the game after receiving a yellow card as Van Wyk’s educated boot forced them back into their own territory.

They stood firm, however, and came close to snatching the win through Oerson’s final brave attempt.

In one of the anticipated matches of the day Brandwag and Grey did not disappoint. This was a bruising battle in which neither side conceded an inch and always seemed to find a way through as their fortunes fluctuated throughout.

Grey took a 17-10 lead into the second half but this was quickly swept aside when flank Keanu Botha burst through the defence to run 30 metres for his second try.

The Gqeberha side showed their attacking potential as scrumhalf Daylon Myners outwitted the Brandwag defenders to put them 24-17 ahead, but a Brandwag penalty and a defensive lapse which saw powerful centre Liyema Mtotoyi surge through put the Kariega side back in front.

However, Grey continued to attack and Zuki Tom rounded off another excellent move to make it 31-27, a lead they held onto until the end.

Framesby followed a similar pattern after they saw a 17-10 lead against St Andrew’s transformed into a 22-17 deficit before striking with a late try for a 24-22 result.

The closeness of the sides was reflected in the 10-10 deadlock at halftime after Framesby were awarded a penalty try and flyhalf Nicholas Lane darted over for St Andrew’s just before the break.

A try by wing Bryan Ellard saw the advantage swing Framesby’s way but St Andrew’s kept hammering away. On two occasions they were able to slice through the Gqeberha team’s defence for excellent tries by Miles Bowden and Jacques Cloete.

Framesby, though, were awarded for their persistence when flank Corne Scheepers went over for the final score of the match, Logan Muller making the difference with his conversion.

The day started with a one-sided affair as Pearson proved too strong for Mary Waters (64-5), but this was followed by some well-contested match-ups.

Hudson Park conceded tries in the beginning and the end against Nico Malan, but sandwiched in between were scores from Sibabalwa Mahashe, Jacqyl Wright and Lindani Dweba, with Dweba kicking three conversions in a 21-14 victory.

Muir also scored three tries to take control in a 24-7 result against Cambridge, while Marlow’s energetic performance in the second half eventually proved too much for Dale.

There was little to choose between the two sides at halftime when Dale led 12-10, but the Cradock team upped the tempo in the second half and their opponents were found wanting,

The Dalians could not add to their score while further tries by Burrie van Heerden, Janco van Pletzen and Ulrich Schultz helped Marlow power to a 31-12 win.

Kingswood and Queen’s played in the main curtain-raiser, but neither side could find their best rhythm, with Kingswood doing enough in the end to secure a 14-3 victory.

Photo: Graeme’s Kenneth Magau goes on a run during their match against Selborne in the Graeme College Rugby Day, sponsored by Buco, in Makhanda on Saturday. The match ended in a 7-7 draw.