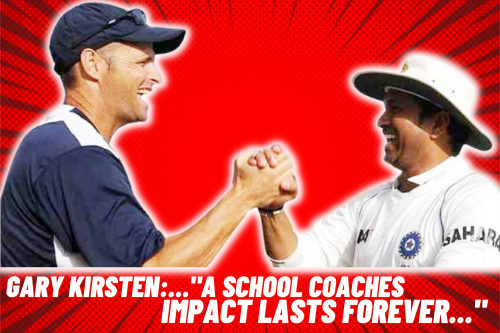 Player development, not rankings and results, should be the primary responsibility of a school cricket coach

I was incredibly fortunate to spend three years coaching the Indian cricket team from 2008 to 2011. My term ended with a World Cup win and the Indian team ranking as the number one Test team globally.

People have often asked me what it feels like winning the World Cup.

And, while winning that coveted trophy was the pinnacle of that particular journey, nothing can replace the impact and influence I was so fortunate to have had on many of those players. It was such a massive privilege to be part of a three-year journey with a group of players with whom I built such close relationships.

The lasting impression I have of that time was a conversation I had with Sachin Tendulkar’s wife, Anjali. She kindly thanked me, not for the win, but for the positive influence I’d had on Sachin’s career. She described these as ‘the most enjoyable three years of his cricketing life’.

Winning trophies and rankings are fleeting, but the positive impact a cricketing coach has on a player’s life really lasts forever.

School Cricketers are not ‘performance tools’

At school level, cricket coaches have such a short window to influence a player’s career. And, while this time is limited, the impact one trusted coach can have on a young, impressionable player is massive.

I have personally witnessed far too many school cricket coaches focus purely on their team winning games of cricket. Very little coaching takes place during the weeks, with coaches ensuring their most talented players are positioned to do the bulk of the work and get the desired results.

A question I frequently ask young school cricketers is: ‘What did you learn from your coach this week?’.

More often than not, the response is a blank stare or the fact that the coach criticised the players for their poor performance.

School cricketers are not the coaches ‘performance tools’.  They are young, developing human beings who require skilful coaching and leadership so they can manage the challenges of performance. Each one of those players is an individual who needs a mentor to positively direct their paths, and have a lasting impact on their sporting journey.

It’s important to remember that many teenagers often find their identities on the sports’ field. It’s a space to express themselves honestly and showcase their talents. I was one of those teenagers, distinctly uncomfortable and timid in the classroom setting, but an extrovert on the sports’ field.

My U19 rugby coach, who was also a teacher, was the best school coach I have ever worked with. He was a mentor to me, spending many hours outside of team practice to help me develop my skills. He coached for the pure love of coaching, and when he identified a young player with some ability, he was enthusiastic in working with that player to hone their skills. He was a hard taskmaster and demanded much as he helped me progress – but he was always there, willing to put in the extra hours of coaching.

We have to truly define the meaning of coaching at any level of sport. We play sports to compete and we strive to be the best we can be. The best coaches help a team realise its potential and, more often than not, a talented team will produce good results. However, the true essence of coaching and leadership is not whether a team is winning, but whether a team and its players have progressed and developed as people.

I caution school coaches not to focus on rankings, results and personal affirmation, but rather to coach and lead for the pure love of watching people develop and grow. There is nothing more meaningful and fulfilling than watching a player thrive in his career, knowing that your coaching effort, played an instrumental part in his development.

I always enjoy listening to a professional player refer back to a school coach who had a positive impact on their careers. That’s why I urge cricket coaches to use this opportunity and privilege to become a mentor to many!

More about Gary Kirsten and CoachED