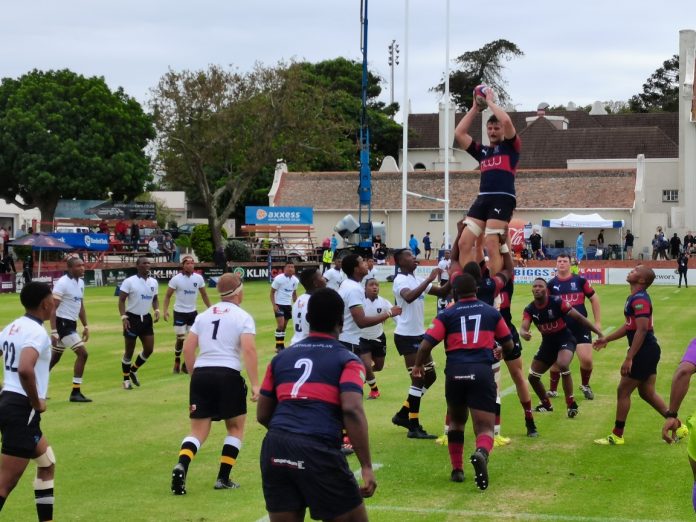 Slick Grey start festival on a high note against SACS

Grey High delivered a slick performance, linked to power up front, to go on a seven-try romp as they outclassed SACS 41-9 on the first day of the Standard Bank Grey High Rugby Festival in Gqeberha on Thursday.

The event, supported by Powerade and Algoa FM, is back on track after missing two years and the players revelled in excellent conditions in front of thousands of fans.

In the day’s finale, SACS tested their opponents in the early stages and took the lead through a fine penalty by flyhalf Conrad Raashied.

However, Grey soon found their rhythm and they constantly challenged the SACS forwards in a tough battle for supremacy.

Grey then began to gain an ascendancy up front and from a five-metre lineout they forced their way over for skipper Ivan Ingram to cross for the first of two tries in that fashion.

They led 17-6 at the break and although SACS never stopped trying, they could not break down the home defence and, in their half, they were tested to the limits.

This resulted in two further tries from five-metre lineouts, one a penalty try and then Ingram’s second, and as the gaps opened Luvuyo Nkomphela and Zuki Tom also crossed the whitewash.

Raashied’s boot kept SACS in the hunt with two more penalties, but ultimately Grey’s control up front and energetic attacks from the back proved too much for the Cape Town side.

In the opening match on the Philip Field, Queen’s were desperately unlucky to lose to Westville, being undone by a try in the final minute to go down 22-20.

It was a game in which neither side were able to stamp their dominance on proceedings and although Queen’s ran in three good tries, each time the Durban outfit were able to counter that.

In the first half Lesego Bota crossed for a fine try after a good backline move created space on the left and Aluve Stemela added a second, which Bota converted.

But Westville twice hit back with tries and the teams went into the halftime break deadlocked at 12-12.

The see-saw battle continued in the second half as Bota slotted a penalty, only for Westville No 8 Avethandwa Tukwayo to power over from close range for their third try to put his team 17-15 in the lead.

Queen’s stormed back onto the attack and Sisipho Mpaka scored in the righthand corner to regain the initiative, but Westville were not done.

Some good work by their forwards and backs saw them work their way back into the Queen’s 22-metre area and a series of penalties close to the line eventually resulted big lock Ockert Schonken barging over to take the score to 22-20.

Although the conversion failed, the final whistle went before Queen’s could kick off again to deny them a final chance at glory.

Selborne had a tough outing against George side Outeniqua but held their own for much of the first half before their opponents upped the pace with direct running at their defence.

Eventually the dam wall broke and centre Tony Bruiners was first to score when he sliced through for a superb try.

Outeniqua’s ability to create chances was revealed with an excellent try by scrumhalf Jamil Pretorius and hooker Riaan Swart made it 21-0 at the break when he powered over under the posts.

In the second half the George team were awarded a penalty try and crossed again through flank Dewald Gerber before Selborne finally had some joy when they attacked near their opponents’ line.

Jordan Luck was able to force his way over and Kyle van Wyk added the conversion to make it 33-7.

But Outeniqua were not finished and yet another attacking move ended in their sixth and final try to secure a well-deserved 40-7 win.

Framesby showed good control to land four penalties by flyhalf Logan Muller and a try from flank Corne Scheepers to register a hard-earned 19-0 win over Jeppe.

Bishops displayed their exhilarating brand of running rugby to outplay Makhanda rivals St Andrew’s 42-5, while KES got their festival off to a good start with a 20-12 win over Nico Malan.

They did not have things their own way and Nico Malan pressed hard towards the end, only for KES to avoid the danger with an intercept which took play back to the halfway line.

Photo: Westville edged Queen’s with a last-minute try for a 22-20 in an exciting start to the Standard Bank Grey High Rugby Festival in Gqeberha on Thursday.