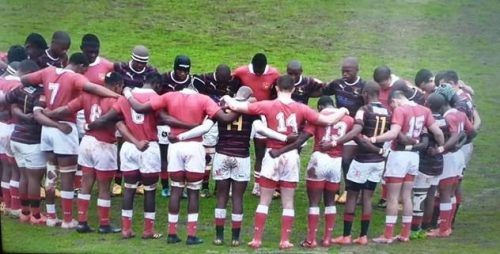 Perhaps the most remarkable thing about the second day of the 2022 Standard Bank KES Easter Festival is that the programme of six rugby and 12 hockey games could be completed under the most difficult of conditions.

The day started off cold, with just a light drizzle, and it looked like we might have dodged the bullet, seeing every weather forecast app on the Worldwide Web had predicted torrential downpours and flooding all day.

It did begin to rain in earnest at about 1pm, however, while Jeppe were playing Hudson Park, and it didn’t let up for the main game of the day – the hosts again Dale College. As a result, those games were played in very difficult conditions, with pools of water in places on the field, and a slippery ball.

To their credit, the KES and the Dale boys tried to play rugby, which didn’t always work out for them, and the famous KES home crowd added resilience to their qualities of passionate support, with the schoolboys and old boys literally singing in the rain until the very end, and even after the final whistle.

The last game of the day started off dramatically, with boys from all the other schools who were still at the ground spontaneously forming a tunnel that stretched halfway across the field in support of the Dale team who lost two team mates in the last week. It’s a practice that is frowned on in school rugby in these parts, but I guess it could be excused under the circumstances.

There was also a lone piper, and a moment of silence and when those displays of respect were over, the boys got stuck into each other properly. There was never going to be much attractive running rugby under those circumstances and in the end KES outmuscled the Dale boys, and they managed to handle the wet ball better, making fewer mistakes.

KES went into a 20-3 lead at halftime, and there wasn’t any more scoring until late in the game when the Reds forwards scrambled over for two more tries to make it a comfortable 32-3 win

The game before, between Jeppe and Hudson Park was played in even heavier rain if anything. The conditions suited Jeppe with their bigger forwards and direct, driving style of play. They led 10-3 at the break and slotted two second half penalties to lead 16-3 with time just about up, Hudson Park then got a try in the final seconds to make it 16-10 to Jeppe in the end.

The first game of the day, between Durbanville and Centurion was a one-sided affair, won 66-7 by Durbanville in the end. It’s Durbanville’s first time at the tournament and they have made a lot of friends with their attacking play and slick handling. They scored some scintillating tries on day one, and then were fortunate to play on Saturday morning while it was still relatively dry and they carried on where they had left off the day before.

Trinityhouse lost quite badly to stand-ins Northcliff on Thursday and there were worries that they might cop another big one from Nico Malan on Saturday. The rose to the occasion, however. The score was 5-all for a long period of the first half, with Trinity threatening to score. Nico Malan got a try just before halftime, however, and they were then made to work hard for another two in the second half, to win 26-5.

Eldoraigne beat Ben Vorster 33-3. They were held up front by the Jeppe 2nd side on Thursday, but their pack got going on Saturday and they effectively starved Ben Vorster of the ball and won quite comfortably.

The Northwood vs Queens clash was a much-anticipated meeting of two similar sides with big athletic forwards and pacy backs. It didn’t disappoint. Northwood were still in the game at 10-3 down going into the second half, but Queens then got their combinations between forwards and backs going and they scored two late tries to run out 22-3 winners.

If the rain carries on with the same intensity on Sunday, as has been predicted, then conditions are going to be as difficult on Monday. That said, the Queens vs Durbanville clash at 10.20am is looking like being the game of the day, with the Jeppe vs Dale matchup also likely to produce an exciting contest.