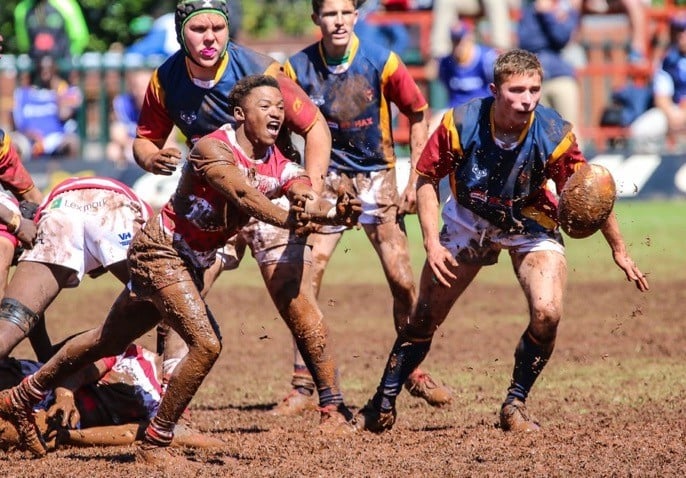 The 2022 Standard Bank KES Easter Festival closed on high note for the home team on Monday afternoon when they beat Eldoraigne 33-7 in the last game of the weekend.

The rainy weather of the previous two days cleared up on Monday, and although the field was muddy, the teams revelled in the sunny conditions and closed the weekend off with some sparkling rugby.

KES’s victory meant they won three out of three at the festival, after beating Queens and Dale on days one and two. They were the only team to do that and it was the cherry on the top of what turned out to be a great festival, despite the challenges of some pretty extreme weather conditions.

The home side raced to a 21-0 lead early in the game and a runaway victory was on the cards, but Eldoraigne came back strongly in the second half, particularly in the loose phases, and they made KES fight hard. If anything, they shaded territory and possession and after scoring a good try, they came close to getting another. The Reds used the limited opportunities that came their way to full effect and scored three long range tries to make the victory safe.

In the main curtain-raiser, Jeppe prevailed 14-10 over Dale in a proper mud-wrestle. The never deviated from their plan of driving the ball up with their forwards and Dale managed to stop them for most of the game, but not all of it, and Jeppe muscled over for two tries for an ugly, but effective, win.

The day began with Northwood beating Centurion 24-3. Northwood dominated the forward exchanges, and with both sides battling in the slippery conditions, they managed to get a few backline moves together and scored two excellent second half tries to run out comfortable winners.

The Queens College vs Durbanville game was expected to be a classic. In the end Queens were tactically more astute, their tactical kicking was spot on under the circumstances, while Durbanville’s attempts to play running rugby were foiled by the underfoot conditions and the slippery ball and they were well beaten, 41-11.

Hudson Park managed to get their expansive game working and their tricky runners managed the wet conditions better than most. They scored 10 tries in their 61-3 win over Trinityhouse. Trinity, to their credit, never gave up and the game ended with them spending quite a long period in the Hudson Park half, and they came close to scoring.

The Ben Vorster vs Nico Malan clash was the closest of the day. The sides are quite similar. Both have big packs and hard-driving loose forwards and neither gave the ball much air. The lead changed hands several times and Ben Vorster found themselves one point up, 19-18, when time ran out.