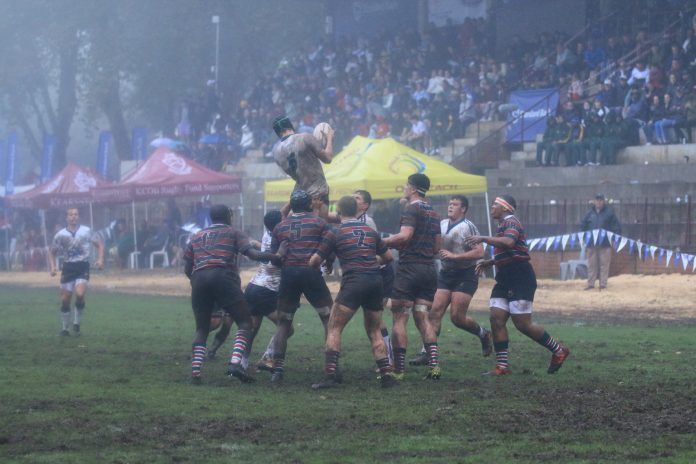 With the mist swirling in, only as it does at Botha’s Hill, play disappeared only to reappear as the wind moved it.

A penalty was awarded and after a number of minutes, waiting for an injury to a Pretoria player, Tattersall was seen to take a penalty. With the breeze behind him, his kick was successful to give Pretoria Boys a 3-0 lead.

Two further penalties were awarded within kicking distance and Tattersall was successful with both, leaving Pretoria Boys 9-0 in the ascendancy.

Just on half-time, with play obscured by the mist, Pretoria’s Litha Mkunqwana went over and Tattersall was again accurate with his kick, leaving Pretoria Boys 16-0 up at the break.

In the second half, Marlow had the wind at their backs and they spent the first 10 minutes in the Pretoria quarter. MC Strydom got over for a try, converted by Aiden de Villiers, to take the score to 7-16.

Midway through the half, again playing in thick mist which obliterated vision, Marlow were awarded a penalty which De Villiers converted, narrowing the gap to 10-16.

A rare move towards the field against the wind, saw Jason van der Merwe go over for a Pretoria try, to take them into a 21-10 lead.

There was no further scoring, leaving the final score a 21-10 victory for the boys from Pretoria.