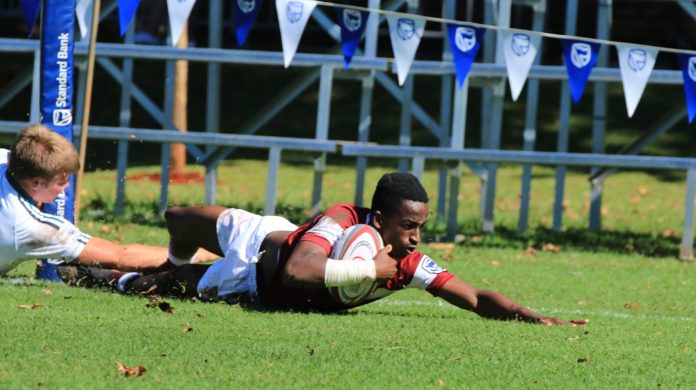 The 13th Standard Bank Kearsney Easter Rugby Festival kicked off in beautiful, warm sunshine following a week of KwaZulu-Natal being battered by heavy rains. The Stott looked magnificent and in good condition, ready to welcome back players and spectators after seeing little action for two years during the Covid pandemic.

Play opened with a minute’s silence for the two Dale College 1st XV players, Liyabona Teyise and Lisakhanya Lwana, who tragically died recently.  Dale has participated in several Kearsney festivals, including the inaugural one in 2008.

As has become tradition, hosts Kearsney opened their festival, this time playing newcomers Hoër Landbouskool Marlow from Cradock in the Eastern Cape.

The first half was evenly contested with the Marlow forwards giving their team a slight advantage. The Kearsney back line, with centres Aya Mngaza and Siso France, both full of running, were able to make a few breaks.

The first by Mngaza ended with a tackle near the try-line and from the ruck hooker Devahn van der Walt dived over.  With just a minute from half-time, France made a good break, feeding fullback Nhlakanipho Ngubane who had the pace to get over the corner.

Both conversions were missed for Kearsney to lead 10-0 at the break.

After 15 minutes of the first half where play had moved up and down the field, a concerted effort by the Marlow forwards ended with eighthman Burrie van Heerden diving over.  The conversion by centre Aiden de Villiers was successful.

Kearsney got back into the Marlow half, but a handling mistake was pounced on by left wing Dempers Meyer.  He made 30m, passing inside to centre Leonard Booysen who had the pace to outstrip the cover defence and go over under the posts.  De Villiers converted for the visitors to go into a 14-10 lead with 12 minutes remaining.

As the game progressed, so Kearsney came under increased pressure with the Marlow backline imposing themselves. The game ended with no further score but with Kearsney doing more defending.