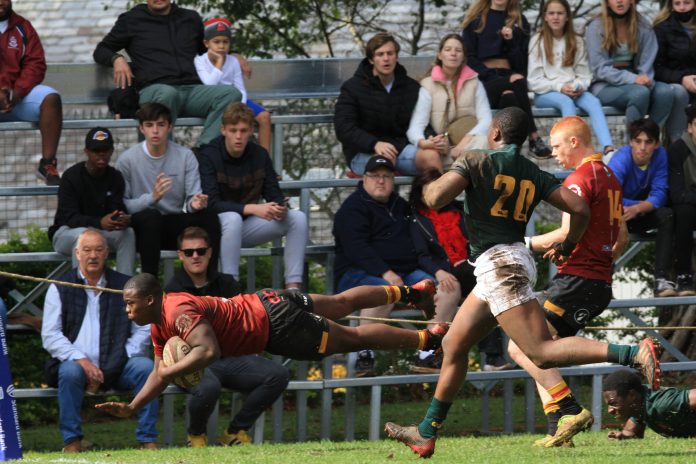 The Stott field at Kearsney College had large muddy patches from Saturday’s heavy rain and play, but it looked reasonable in the match between Glenwood and Dr EG Jansen from Boksburg.

Glenwood, as expected, dominated both territory and possession for much of the first half. They did have an opportunity to score the first points, but the ball was dropped just five metres from the goal line.

However, the pressure was maintained and Glenwood fly-half Frederick Marx converted a penalty for a 3-0 lead which was soon increased to 10-0 after centre Johandre van Rooyen scored, converted by Marx.

EG Jansen eventually got into the Glenwood half and applied some pressure which culminated in a penalty try for them to narrow the gap to 7-10 going into half-time.

The second half saw a change in fortunes as for 20 minutes of the second half they camped in the Glenwood half.  The local team were their own worst enemies, as they gave away numerous penalties, a number due to ill-discipline.

A penalty for EG Jansen, from in front of the posts but 40m out, went just wide. It would have put them in the lead. It mattered not as they kicked for a lineout from another penalty and the ensuing maul saw prop Marnus Swart come up with the ball, for EG Jansen to lead 12-10.

With five minutes remaining prop Tshepo Ledwaba scored in the corner to increase Jansen’s lead to seven points. Glenwood came close to scoring but EG Jansen held out to win the match 17-10.