Home Sports Rugby Is This the Greatest Rugby Poem Ever Written? 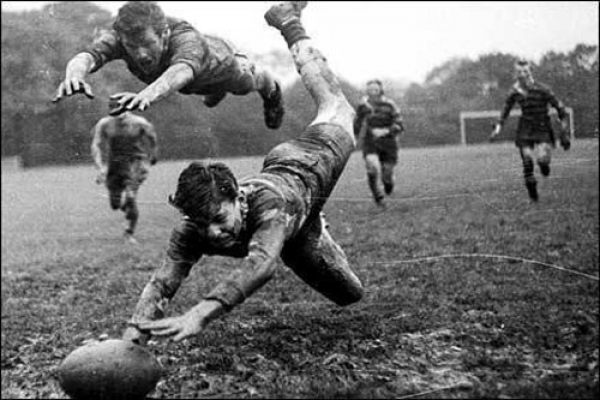 IS THIS THE Greatest poem about rugby ever written?

Week in and week out around South Africa you will find hundreds of schoolboys playing rugby in front of thousands of spectators, fathers, brothers, mothers and sisters who live each tackle and snipe through every gap with the players.

Many would argue that the passion for this sport is unrivaled and unmatched, but just why do so many want to play one of the most rigorous and physically demanding of games?

Obviously there are many reasons players would say why they play rugby, what drives them on to give of their all at the training sessions and on match day.

A poet by the name of Rupert McCall has perhaps penned the most compelling reason why we play rugby. Take a read through his words and see if you agree.

Why we play the game

When the battle scars have faded

And the truth becomes a lie

When the weekend smell of liniment,

Could almost make you cry

When the last rucks well behind you,

And the man who ran now walks,

It doesn’t matter who you are

Have a good hard look son

That melon’s not so great

The snoz that takes a sharp turn sideways

Used to be dead straight.

You’re an advert for arthritis

And you ask yourself the question

Why the hell you played the game?

Was there logic in the head knocks

In the corks and in the cuts

Or did common sense get pushed aside

For manliness and guts

And do you sometimes sit and wonder

How your time would often pass

In a tangled mess of bodies

With your head up someone’s arse

With a thumb hooked up your nostril

Scratching gently on your brain

With an overgrown Neanderthal

Rejoicing in your pain

Mate, you must recall the jersey

That was shredded into rags

Then the soothing sting of dettol

On a back engraved with tags

Although with some degree of shame,

That your wife was right in asking

Why the hell you played the game.

But then with every wound reopened

As you grimly reminisce it

Comes the most compelling feeling yet

Christ, you bloody miss it

You see, from the first time that you lace a boot

And tighten every stud

That virus known as rugby

Has been living in our blood

When you dreamt it

When you played it

All the rest took second fiddle

And now your standing on the sideline

But your hearts still in the middle

And no matter where you travel

You can take it as expected

There will always, always be a breed of people

If there’s a team mate

Then you’ll find him

With a common understanding

And a beer or three of course.

And as you stand there telling lies

You know that if you had the chance

You’d do it all again

You see, that’s the thing with rugby

It will always be the same

And that my friends I guarantee you

Is why the hell we play the game.

Why do you play rugby? Tell us your reasons…