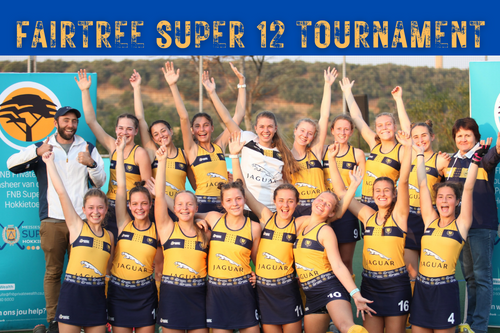 Every coach will know that plenty of things can go wrong for your team in a hockey match. Myriad reasons why a match you should win isn’t won.

Star striker/goalkeeper/playmaker has an off-day, a controversial decision turns the match away from you, ill-discipline costs your favoured team against a lesser-rated side, and you are the victims of an upset … and … and…and.

During the past decade the Oranje Meisies first team has lost just nine games out of the staggering 400 matches they have played. The have recorded a 127-match winning streak which included going 1007 days without conceding a loss. They have been the undisputed No.1 ranked team in South Africa for 10 straight years and have routinely claimed the St Mary’s Waverley Tournament title and the Super 12 during this time.

As the leading schoolgirls hockey team in the country, it is perhaps fitting that Oranje Meisies is also the hosts of South Africa’s premier school hockey Tournament. The Fairtree Super 12 Hockey Tournament.

A Brief History of the Fairtree Super 12 Tournament

The word ‘super’ is defined by the dictionary as “something that is above, over, beyond or on the top of…” and if tournament organisers are going to be brave enough to put the word “Super” in the tournament title one would expect that the tournament they will host will be something out of the ordinary. This has certainly been the case with the Fairtree Super 12 Tournament. Since its inception in 2013 it has indeed been a tournament that has been above and beyond anything that school hockey has seen in South Africa. It has truly been Super!

One of the reasons why the Fairtree Super 12 Tournament is a cut above the rest is because they can invite the top ranked teams in the country every year. How do they accomplish that?

In 2012 Oranje Meisies approached SA SchoolSports (www.saschoolsports.co.za), which has been the leading school sports website and magazine for the past 15 years, with the idea of basing their invitations to the tournament on the SA School Sports Rankings that are published on the website.

It was a game-changer of an idea and immediately elevated the tournament because for the first-time invitations to a hockey tournament would have a clear criterion. “Get ranked in the Top 8 on the rankings and your team would automatically qualify for the tournament.”

In 2013 the first Fairtree Super 8 Tournament took place with the 8 top ranked teams invited. The success of the tournament grew quickly and in 2016 it was expanded to include the top 12 ranked teams on the SA School Sports Rankings.

Attracting the leading teams in the country brings with it a level of competition that is not seen in any school sports tournament in the country. Despite this the Oranje Meisies First Team have dominated the Fairtree Super 12 Tournament from its inception. They have won the tournament on 6 occasions since 2013 and if it was not for COVID-19 preventing the 2020/21 tournaments from taking place they could well have added more titles. The only other team to have won the Super 12 Tournament has been Menlopark who took the honours in 2018.

Oranje Meisies have won more matches than any other team at the tournament with 40 matches going their way and have scored a mammoth 136 goals whilst conceding a miserly 31 during the history of the tournament.

Added incentive for Oranje to Win in 2022

Although Oranje will as usual benefit from home ground advantage there is one more huge incentive that will make the Oranje Meisies team a very difficult opponent in this years tournament. They will be playing to give their Coach Extraordinaire Morné Ordendaal the ultimate sending off gift.

Morné Ordendaal has been integral to the growth and dominance of Oranje Meisie’s hockey during the past decade, but the 2022 Fairtree Super 12 Tournament will be his last dance as he will be leaving to take up a once in a lifetime coaching assignment at Ivy League Wake Forest University in North Carolina, USA.

Morné, started his journey with Oranje Meisies back in 2011 when he was coaching the U13 teams. During his tenure he has enjoyed a staggeringly successful time and will leave with a 95% winning ratio against the best in the country.

It is a record that few great coaches can even come close to. Yet Morné would be the first to admit that his and Oranje’s success has not come about by accident.

“My values that I instil in the team is firstly to fight, to have a willingness to go to a place our opponents are incapable of going to. Secondly, do your job, they must be a disciplined team that respects the detail of the process. And thirdly, the team comes before yourself, they need to be accountable for themselves and their teammates efforts and actions,” says Morné.

It is clear to see that the huge success that the Oranje first team have enjoyed in hockey has been thanks to a dedicated coach who has been able to cultivate an unparalleled work ethic with the players. Many of their finest players started right at the bottom of the hockey nursery but rose brilliantly through the ranks due to sheer dedication and work.

It is little wonder that some of the best Universities in the world have taken an interest in Morné and we join the hockey community in wishing him every success in this new chapter! What better gift to give their coach than one more title to pack in his luggage for the USA!

Who Will Win the Fairtree Super 12 Tournament in 2022?

Perhaps this year’s tournament is the closest it has ever been for some years. Although Oranje Meisies go in the tournament holding all the aces the other 11 teams will have noted that Oranje did lose a match this season and can be beaten.

Eunice broke a 10-year drought and managed to beat Oranje earlier this season and must be one of the contenders for the title and will almost certainly meet their neighbours for one last showdown during the tournament. Eunice will be confident that they can beat Oranje and time will tell if they can once again rise to the big occasion.

St. Mary’s Waverley and Paarl Gymnasium are always up for the fight, and we should expect to see them pushing to get into the knock-out stages where tournaments are won and lost. Both teams narrowly lost to Oranje Meisies this season and will relish the opportunity to get a rare win should they meet again.

Menlopark cannot be discounted either, as the only other team to have ever won the Fairtree Super 12 Tournament they will be playing with some history on their side. Coach Warren Sangster has trained his team relentlessly this year and has kept them busy with over 35 matches played this season. One of the fittest teams in the tournament it would not come as too much of a surprise to see Menlo fighting it out for the medal positions.

There will be a lot of eyes on Beaulieu College who will be making their first appearance at the tournament this year. A relatively unknown team to most of the Free State and Cape sides at the tournament, Beaulieu is ranked 7th in the country in what has been a sensational season for the Gauteng team. Time will tell whether they can mix it with the other powerhouses of school hockey however they are a team not to be taken lightly and could be the tournament giant killers.

Rhenish and Durban Girl’s College go into the tournament as the 11th and 12th ranked teams but will be wanting to prove that they perhaps are better than what their ranking suggests. Having beaten the likes of Paarl Gim this season Rhenish have the team to cause an upset and, on the day, can put together a winning combination. Durban GC is the only KZN team on display and have recorded some impressive wins so far but have also been let down by some close defeats, including a 1-0 loss to Oranje earlier this season. It will be interesting to see how these two teams fare against the country’s best.

Herschel Girls’ are consistently at the top of the rankings and regulars at the Fairtree Super 12 Tournament. They finished 6th in the 2019 edition of the tournament and have the ability this year to go even further. Look out for the pink powerhouse to get plenty of goals in 2022!

Free State’s 3rd team at the tournament is Voortrekker Bethlehem coached by Emile Odendaal brother of the Oranje Meisies coach. Voortrekker have risen rapidly through the ranks in recent years and are currently occupying the dizzy heights of No.3 in the rankings. With only two losses so far this season which includes a brace of 2-1 defeats to Eunice and Pearson, they will be relishing the opportunity to spoil the party for Oranje and certainly can do so.

Collegiate and Pearson complete the 12 top ranked teams in the country and on their day are a match for any team at the tournament. They are the Queens of Gqeberha (try saying that three times fast) and their result for this year speak for themselves. Eunice struggled to beat Collegiate this year and Pearson will look to their victories over Rhenish and Voortrekker this year as proof that they are the equal to any team on display. Expect to see these two teams in the mix at the business end of the tournament.