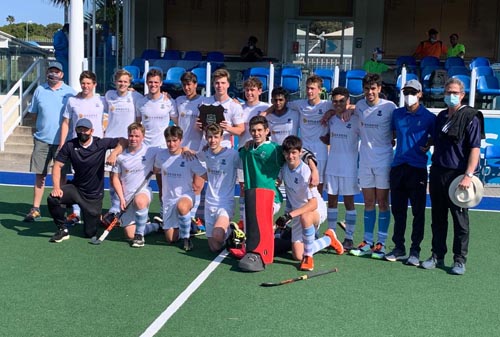 Over the long weekend, Grey High School hosted its second edition of The Hibbert Shield.

After having to postpone the Shield twice, six schools managed to take part namely Grey High School, Pearson High School, Paul Roos, St Stithians, Grey College and SACS. Having not had the opportunity to play these kind of events for so long now the energy and buzz around being back on the turf was electric.

The Shield kicked off with a local derby against Grey High and Pearson. In a truly dominant display by Grey they ran out 6-0 winners, thanks mainly to a superb hat trick by Joshua Voigt, and put every other team on notice that they meant business.

Day 2 saw the rest of the teams kick off their run, but the highlight of the day was the clash between the 2019 Hibbert Shield runners up Paul Roos and the hosts. Even without crowds allowed, it had that big game feel with the pavements outside the school packed with spectators. Paul Roos were defensively solid and hard to break down, but Grey kept knocking on the door and eventually took the lead through a blistering drag flick from that man Josh Voigt. Paul Roos then opened up a bit more in search of an equalizer only to concede a second via a far post tap in by Syleshan Rajagopal. Paul Roos got themselves back in the game through a penalty corner goal of their own but Grey had no intention of letting them back in the game and would eventually run out 3-1 winners.

Day 3 saw a mixed bag of performances from Grey as they were outplayed by SACS, who most considered to be Grey’s toughest challengers for the shield, but thanks to a brace by Voigt and some solid and at times last ditch defending by players like James Hofmeyr and Keanon Friend Grey would came out on top 2-0. The heat and the pressure put on them by SACS clearly affected the hosts as they had to dig deep after a sloppy start against St Stithians who had struggled all weekend. Grey managed to come back from 2-1 down to win it 3-2 and maintain their unbeaten run.

Due to some surprising results in other fixtures, Grey went into the final day having already secured the 2021 edition of The Hibbert Shield. It was the last high school fixture for senior players James Hofmeyr, Josh Voigt, Jean Pienaar, Travis Coleman, Basheer Ensal & Simon Baxter. The emotion and desire for them to finish on a high and for Grey to emerge from the festival unbeaten was clear for all to see as they put Grey College to the sword and capped what was a great weekend off with a comfortable 4-0 win.

The highlight of the weekend was just seeing boys having fun in an environment that they love. With all that has happened in the world since March last year, it was a little glimpse into normality and hopefully the start of more positive things to come.