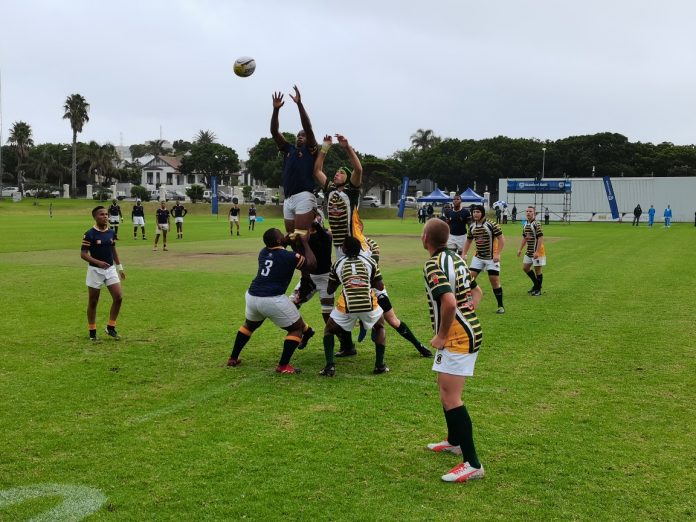 Hosts Grey nearly made a hash of things but finished strongly to secure a 22-15 win over KES on the second and final day of the Standard Bank Grey High Rugby Festival in Gqeberha on Saturday.

Supported by Powerade and Algoa FM, the two-day tournament closed on a high note with several intense contests, highlighted by the clinical finishing of Bishops as they dismantled the powerful Outeniqua side 31-20.

Grey, meanwhile, continued a proud record at their festival, although there were distinct feelings of uneasiness among the home fans when a series of unforced errors allowed powerful KES flank Thabang Mphafi to cross for his second try with eight minutes left.

The conversion was missed but KES led 15-14 and Grey knew they needed to do something special in the closing stages.

They achieved this two minutes later by working their back into their opponents’ 22-metre area and forcing a penalty, which flyhalf Mihle Matanise, who had a good day off the kicking tee, slotted to put Grey back in front.

They continued to pressure the KES defence and from a ruck following another attacking move down the left, No 8 Jake Barnard collected the ball and smashed his way over to give them some breathing space.

Although this time Matanise missed the kick, KES did not have enough time to force their way back into the game.

Earlier Grey had set themselves up nicely with tries by wing Siviwe Bwowe and hooker Ivan Ingram to lead 14-3 at the break.

However, several lapses in defence let them down and this allowed KES to close the gap through the towering Mphafi’s efforts, whose first try came from a great run down the left touchline as he outwitted the home defenders to get his team back into the game.

The side of the festival were undoubtedly Bishops, who followed their 42-5 demolition of St Andrew’s on Thursday with a brilliant performance against Outeniqua.

Nobody can take the George team lightly, but on Saturday they had no answers to the Cape Town team’s brand of running rugby.

Not only did Bishops run directly to exploit gaps in the Kwaggas’ defence, their passing among the backs was so accurate that they regularly created space out wide from which to launch numerous attacks.

Outeniqua had their moments on offence as well, but too often their final pass went astray. As mistakes crept in, Bishops seized the moment to run in five tries for an outstanding result.

The final day was marked by several tight finishes, with both Selborne, against Framesby, and SACS, versus Queen’s, winning by a single point.

The Selborne game went down to the wire after a brilliant run by Framesby flyhalf Logan Muller ended just metres short of the line. But centre Regardt Viljoen was able to pick up from the ensuing ruck to cross for a try and although Muller added the conversion to make it 19-18 with two minutes to play, Selborne were good enough to hold onto that lead for a hard-earned victory.

Queen’s were again denied by a late try after losing to Westville on Thursday in similar fashion. This time the Queenians led 14-10 before SACS flank Daniel Dayaram forced his way over to make it 15-14 and they held that gap until the final whistle.

Graeme College became involved in an arm-wrestle against Despatch, who showed tigerish defence to keep the Makhanda team at bay in the first half.

Eventually, however, the Graeme pressure told and tries by Bhato Hlekani and Asemahle Mbanga, plus a conversion and a penalty from Lagon Oerson gave them a 15-0 win.

Muir showed proper grit against Parktown for a 19-15 victory. They trailed 15-7 with less than 10 minutes remaining but No Isa Marola revealed a great turn of pace to score from 50 metres out following a lineout error (15-14) and in the final minute, Lyle Meintjies dived over in the corner after an attacking move to secure the victory.

Photo: Graeme College (left) and Despatch contest a lineout during their clash in the Standard Bank Grey High Rugby Festival in Gqeberha on Saturday. Graeme won 15-0.