Home Rugby KwaZulu-Natal Glenwood v Westville: Who is the victim? 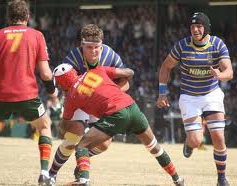 Glenwood have reigned supreme for the better part of a decade in KZN as the strongest rugby school but Westville have been getting ever closer having produced some great wins in recent times over some strong opposition. Their claim to be the number one side in the province was reinforced last Saturday after beating Glenwood 13-9 and scoring the only try in the match.

However controversy over the eligibility of a Glenwood player, Marne Coetzee, sparked off before the match started forcing Glenwood to withdraw the prop from the team sheet which would disrupt the preparation of any team.

As Head Coach of Glenwood Sean Erasmus told SA SCHOOL SPORTS, “the build up to the match was not good at all as the whole week was about whether Marne would play or not. A Glenwood /Westville match is already a big game and then you add this kind of hype and it becomes very difficult.”

So what is the true story behind Glenwood’s inclusion of Marne Coetzee in their team? Did they do anything unethical?

Marne Coetzee, who has spent most of his rugby career in Pretoria where he played for Waterkloof High first team in Grade 9 and 10 and was earmarked as a player who could ultimately play at the highest level when he was selected to play for SA Schools. He is however still 18 years old and will be for the entire rugby season and like many first team players in the majority of schools plays as an U19 player.

“Glenwood did not actively recruit my son”

It appears that Westville’s objection to Glenwood including Marne in their team stems from a suspicion that Glenwood have behaved unscrupulously by drafting a player into their set up who has not gone through all their age groups and he has been scouted to boost the player base of Glenwood?

How true is the claim?

Scouting for players and recruiting is now part and parcel for the majority of the top rugby schools in the country. Craven Week and Easter Festival’s attract school rugby recruiters who have as their objective to attract talented players to their school.

Is this what happened with Marne? Did Glenwood, instead of grooming a young prop from U14, simply go and “buy” a talented prop from Waterkloof?

Martin Coetzee, Marne’s father categorically denies that Glenwood did this or anything that could be deemed unethical.

“Half way through last year as a family we were looking at a couple of options for Marne as to where he should be playing his rugby. The Lions wanted him, he could have gone to Affies but the Bulls had already contracted a lot of props at that point of time which means that he would have been prop number 7 or 8 when playing for the Bulls U20’s next year,” says Martin Coetzee

“So as an ex-Natalian myself who schooled at Voortrekker, we started looking at Durban as a possible place for Marne to play and found that there were more than one school who was interested in Marne.

It was Marne’s choice at the end of the day. Glenwood never actively recruited Marne and I am actually very annoyed by those allegations.”

Marne joined Glenwood in August of 2011 and has fitted in well at the school considering he has joined an English medium school after having spent his school life at an Afrikaans school. He is a prefect at the school and according to his father puts in many hours of study so that he can get a good matric pass this year.

Is there anything unethical about playing a player who has played most of his school rugby for another school, especially considering that it was a family’s decision to move their son and not Glenwood who scouted and lured Marne away from Waterkloof?

The saddest part of this story is that a schoolboy has now become the centre of school politics and he is completely innocent and cannot change his age or his size. Apparently Marne Coetzee was subjected to verbal abuse from the crowd during Saturday’s match all because he is 18 years old and a powerfully built rugby player which simply cannot be condoned regardless of the reason.

“Marne was devastated on Friday, I have never seen him like that before”

There are cries of hypocrisy from many who claim that Westville have already played against school’s such as George Campbell who have several U19 players in their team and that they played against Harlequin’s U20’s which is against the Boksmart regulations.

According to the SARU Regulations for Under-Aged Rugby point 5: “ A U18 team cannot compete in an U19 league or division, as the youngest player in the U18 team could potentially be 15 of the 1st of January, and therefore not be able to compete with the U19 team structure, as they would be more than three years younger than the oldest player in the U19 team.”

Who ultimately is to blame for dragging a school rugby match into so much debate? Whichever side you choose surely the player Marne Coetzee is the innocent party here. As his father says “ Marne was totally devastated on Friday and now my son and my family have become the victim for the decision that (Westville) has taken. I have never seen my son in such a devastated state before.”

The fact cannot be denied that Marne Coetzee is a talented rugby player who simply wants to do what he does best and play rugby. How much game time he gets this season remains to be seen, but ironically his many critics will be undoubtedly  shouting his praises in a few years time when he becomes the hero of another team that wears a green jersey.