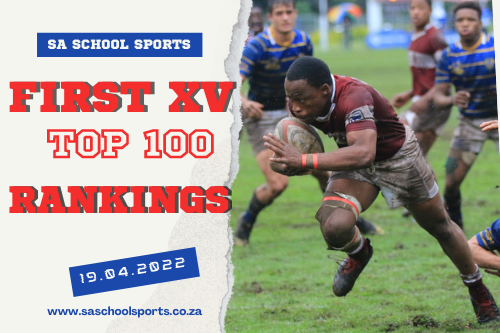 After a rainy and muddy Easter weekend this is how the week’s First XV School Rugby Ranking are looking.

Boishaai leap into the top 3 zone after a highly successful weekend winning all three of their matches including a titanic arm-wrestle with Hilton College who came close to handing the boys from Paarl their first defeat, but not close enough.

Michaelhouse also are amongst those who have moved upward following their win over local rivals Maritzburg College as well as St.Stithians and fell agonisingly short of make it three from three when the narrowly went down to St Andrews College 17-15.

Monument hold their ground in the top 10 zone after being pushed to the limit in all three of their encounters at the Kearsney College Festival, narrowly beating DHS and Marlow. The muddy conditions not proving too conducive to the Monnas running style.

The minimum matches played for this week has been set at 4 matches which may account for some teams not appearing on this week’s First XV School Rugby Rankings.

Several factors are used in the formula to work out the rankings including: Strength of Opposition, Home/Away status, Margin of Victory, Margin of Defeat. Defeat by less than 10 points, Actual Result (W/L/D) and actual points scored.

Please send through your First XV results to [email protected]