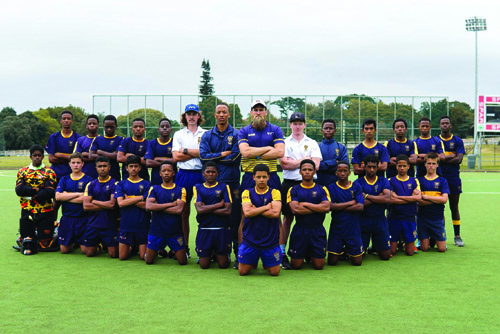 In the world of competitive sport where success and failure play musical chairs, the maxim “One day a rooster, the next day a feather duster” is often seen.

And although we at times may nostalgically look back at our favourite team’s glory years with a touch of sadness, begrudgingly accepting their feather duster-like appearance to be permanent, every so often the feather-duster replenishes its plumage, and the Phoenix appears.

A transformation of similar proportions is underway at Durban High School, the oldest school in KwaZulu-Natal. For the majority of its 155-year history, DHS has enjoyed a prominent place at the school sports table across all the traditional sporting codes.

However, in the recent past it was the DHS hockey performances that started to amaze spectators, but for all the wrong reasons. Season after season DHS teams of all ages simply failed to compete as the opposition lined them up for a regular beating. Questions on whether DHS should even be competing against the top tier teams were whispered as the losing margins increased.

Yet like the mythical Phoenix rising from the ashes, DHS has dramatically transformed into a genuine hockey powerhouse. Success has been gained over their strong KZN rivals, with their U14 A team ranked No.1 in South Africa by SA SchoolSports and still unbeaten.

Putting the right coaches in place

What has been the secret to their success? Let’s listen to the one of men behind the recovery, DHS Director of Hockey, Michael Baker.

“I wouldn’t say it has happened suddenly; this has been a 4-year process focused on rebuilding not only the hockey program but all codes. Starting with a new headmaster, Director of Sport and Directors of the different codes who are passionate and at the top of their game. The school is really focused on being at the top again in all codes.

Hockey wise, it has been tough at times. In my first year I was often losing by more than 8 goals and as someone who really does not enjoy losing, I often questioned myself. The school was great in staying patient and supporting the process.

DHS was one of the lowest ranked hockey schools in the country when I took over, which is crazy given its rich history. We first made sure we had the right coaches in place and then focused on our structures and programs.

A big focus was put into the boy’s strength and conditioning, every year this aspect of their training has got better and better due to DHS investing in incredible conditioning staff and improving the gym facilities.

To accompany the right programs, we had to start focusing on rebuilding the hockey culture and give the playing of hockey for DHS meaning again. The boys were so used to losing hockey games in the past, we needed to build a winning mindset throughout the age groups.

Currently there is so many exciting things happening at DHS, including the building of our own astro turf which will be an absolute game changer.”

Having the right coaches in place has been key to the rebuilding process and in Michael Baker DHS has found one of best. As the current KZN Raiders Coach, he has over 11 years’ experience at provincial level and his dedication to hard work is borne out with his Ultra-marathon pursuits which has included the Comrades and the 26 hour non-stop epic Skyrun.  His exposure to top class hockey teams has helped him instil some vital values to the DHS teams.

“The main value I try to instil is trust. I need to earn the trust of my players and I need to be able to trust them. This helps with tough conversations and that my players know my criticism is coming from a good place not just from a grumpy old man. Another value is enjoyment and fun. We all started playing this game because we love it, sometimes players get so caught up chasing goals and results that they forget to actually enjoy it,” says Michael.

Having played hockey at a high level and now a provincial coach, Michael Baker has witnessed many highs and lows in the sport. However, he goes back to 2017 when he recalls his most memorable moment as coach. Facing WPCC in the final who had beaten his club 3-0 in the pool stages the odds were stacked against Michael’s team.

“They had Eva de Goede in their team who was the 2018,2019 World Player of the year and they had just completely outplayed us. The next game against them was intense, we were 1-0 up on the final whistle, WPCC had a short corner with Eva standing on top D… they got a reward after a great run down, nerves high… could we do the great turnaround? The push out went to Eva who hit the ball higher than the black board and we managed to win the game after being dominated the night before. It really was a great moment as a coach!”

One of the biggest challenges that school sport faces, is to nurture talent that has already been discovered but also to discover some uncut diamonds that the keen eye of the coach is able to polish.

One such player who Michael coached whilst a schoolboy is the South Africa player Lungani Gabela who will be representing the country in Belgium for the World Cup.

“Lungani Gabela surprised me the most of any player. We had a tough first meeting. He did not come to any pre-season sessions and the first one he came to he was 30 minutes late. We had a chat about it and his answers weren’t great, luckily, we are friends now so I can say this, but he was extremely rude! (Laughs) I hadn’t heard great things about his attitude and this was our first meeting. All I knew was he was a great hockey player and I had to get the best out of him. So, I started giving him lifts to early morning training, this meant he was now on time, and I could get to know him! By the end of the season, he turned into a great kid and a real role model to the kids in the younger grades. Seeing him part of the national indoor team that recently qualified for Belgium after I had to beg him to play indoor at school, shows how much he has grown. I guess he just needed someone to see the person behind the talent. We will still chat often today, and I am immensely proud of his growth from our first meeting together.”

A firm believer in the quote “All coaching is, is taking a player where they can’t take themselves”, Michael Baker believes that DHS is on a course that will see them once again challenge as one of the most powerful hockey schools in the country.

“We are days away from the start of building our new Astro-turf at school. This will be an absolute game changer for the program as we now will have more turf time. So more specialised sessions, we can train at appropriate times of the day so more boys can play hockey. Which means more teams and more depth and competition. Our conditioning program is developing all the time and the boy’s mindset towards conditioning keeps developing. I am still young and getting better every year as a coach and as a director. The more I get exposed to, the better our program gets. We are always finding ways to improve our coaches and to ensure we have the best coaches. DHS will never settle and will always keep searching for ways to be number one at everything. As we get better in all codes that winning mind set will become contagious.”

To have the oldest school in KZN still looking for ways to improve and remain a dominant force in school sport is to be admired. Having adapted to the ever-changing challenges to remain at the top we look forward to Durban High School continuing to compete at the highest level.