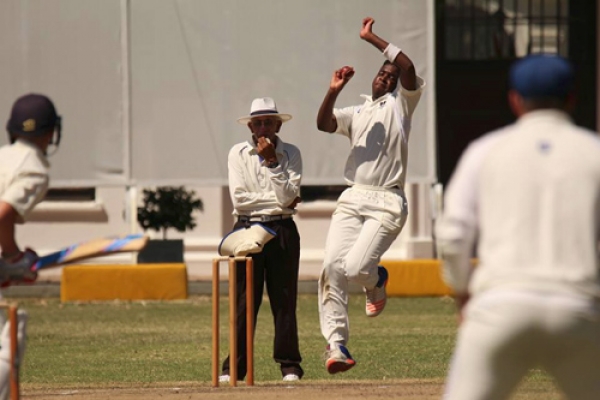 Yet another half century by Daniel Smith helped to secure a victory for the unbeaten SACS team who rest on top of this week’s Belgotex Sports First XI Rankings.

SACS have hit the ground running this season and with the momentum in their sails it is clear that they will be a difficult proposition for most teams that take them on.

Several key matches around the country were abandoned due to rain and lighting which is a pity as it would have been interesting to see how the results of KES vs Grey College and Michaelhouse v St.Charles College would have affected the table.

Still there were some notable achievements last week with Luke Dallas from Hudson Park returning match winning figures of 6/46 in their win over Stirling and St.Bennies Kyle Saxby was in the runs with two well manufactured fifties.

Ethan Burger from SACS was also a star performer in the win over Paarl Gim with figures of 5/61 and an excellent 82 runs by PBHS batter Alex Gurschi helped to clinch a major win over last year’s top team St.Stithians.

Perhaps the most frustrating result of the week was the Rondebosch v Wynberg match that at the end played out to a draw. Both sides had their chances to clinch the win but chasing just 208 runs for the win Wynberg were left struggling to get over the line at 198/9 with both sides bitterly close to victory. That makes it draw number three for Rondebosch who are still unbeaten and will no doubt advance up the table as the results start to go their way.