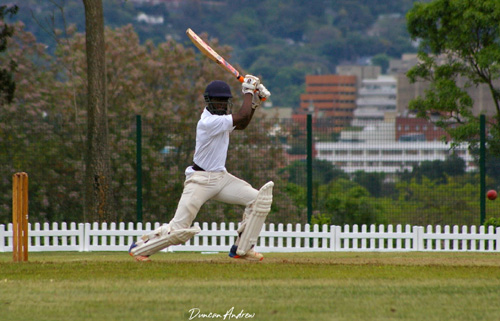 The St Charles College 1st XI continued their magnificent form with the bat, amassing a huge total of 282/5 against DHS on the Theobald Oval this past weekend.

Ntando Zuma and Panashe Taruvinga settled the ship after a shaky start, putting on a 50 partnership for the 3rd wicket. After Zuma fell for 35, it brought captain Raw to the crease and he showed yet again why he is one of the premier players in the province. His 102 off just 85 balls took the game away from DHS and put Saints firmly in control after the first innings.

However, whilst Raw deserves all the plaudits for his stroke play, it was Taruvinga who controlled one end and played an innings of conviction and maturity, especially for a Grade 10. His 81 off 112 balls was a privilege to watch and this U19 international player will have a bright future if he continues to play more innings of this nature.

DHS in reply always had a steady run rate whilst St Charles College set attacking fields, and although the run rate was always hovering around the 5 per over mark, wickets fell at regular intervals and the Saints were never really in danger.

The pick of the bowlers for the visitors was young fast bowler, Ross Ritchie, who returned figures of 4 wickets for 33 runs in 9 overs. The Saints will feel they should have ended the game with a bit more precision, some poor fielding and sloppy death bowling meant DHS only fell 38 runs short. All in all, this was a great away performance from the Saints 1st XI and, with half-term looming, we wish the boys attending KwaZulu-Natal Inland trials all the best.